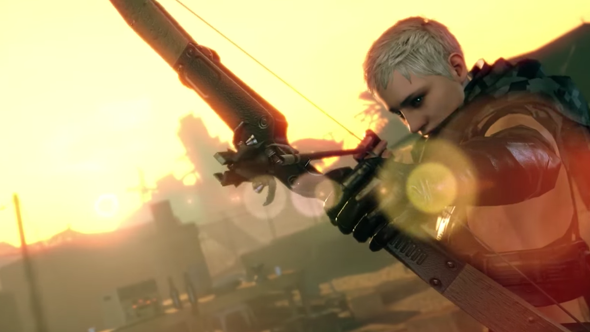 Continuing Metal Gear tradition, there’s a shadowy government organisation at the heart of Metal Gear Survive. Wardenclyffe Section are a research arm of the US government and it’s them who send you through the wormhole void in search of Mother Base survivors.

While Metal Gear Survive’s combat is good, fans of the series may be disappointed.

Metal Gear Survive takes place between Ground Zeroes and The Phantom Pain, seeing you take control of one of the Mother Base soldiers left behind by Big Boss. In the reveal trailer for Survive, we saw that, after Big Boss’s helicopter went down, a great wormhole opened over the burning wreckage of Mother Base and pulled through structures and soldiers before closing.

The soldier you play as in Survive wasn’t pulled through the wormhole but was knocked unconscious in the event. They wake up six months later in a Wardenclyffe Section facility where a man called Goodluck tells them they’ve been infected by whatever was on the other side of that wormhole and the only way to get a cure is to go through the wormhole and investigate.

While Wardenclyffe is new to the games, it likely gets its name from the Wardenclyffe Station, the experimental wireless transmission tower built by Nikola Tesla at the beginning of the 20th century.

The new story details came from a fact sheet Konami published and, besides the plot news, the sheet also lists some of the features we can expect from the game:

• Two modes of play – single player and co-op. Character experience, skills and items obtained are shared between the two modes.

• Build and develop your Base Camp. This offers access to crafting weapons and gear, and serves as a command center for planning missions in both single player and co-op modes.

• Gather resources, blueprints and raw materials for use in crafting. These can be gathered in single player mode by exploring the environment or won in successful co-op missions.

• Manage resources, including essentials such as food and water, as well as raw materials used for weapons, defences and expendables.

• Complete daily, weekly and special event Orders for rewarding materials and blueprints to be used in single player and co-op.