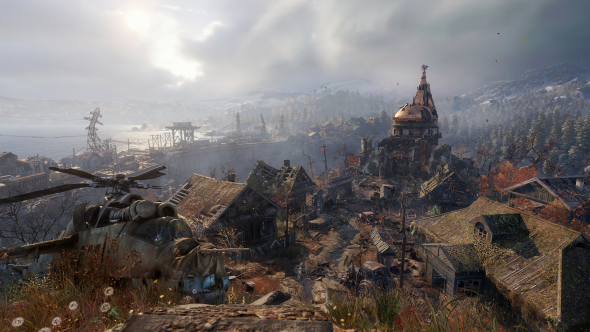 Metro Exodus’ debut trailer found series protagonist Artyom stepping out of the tunnels and into the half-light of post-apocalyptic Russia, before pulling out a map. It felt like a clear signal: Metro is going open-world.

But that’s not quite the case. Metro will remain a linear first-person story in the strong tradition of Half-Life and BioShock.

“First and foremost we’re not moving away from the classic linear Metro gameplay,” executive producer Jon Bloch told us. “We still have that, but what what we’re doing with this new gameplay is more like sandbox survival.”

The idea is ‘Stalker meets Metro’ – a shift back and forth between straightforward segments and vast open areas.

“There’s large levels that offer a lot more freedom, they’re non-linear, but we will have a story wrapped into them,” Bloch explains. “So the story will carry through across the non-linear and linear levels.”

These levels will comprise a story campaign that takes place over the course of a year.

“It’s not exactly an open-world as you may be thinking, but we’re able to offer the player a lot more freedom than in the past,” Bloch finishes.

In short: 4A Games aren’t leaving the metro behind. Tunnels will still be in when Metro Exodus comes out sometime in 2018.