WIth Metro: Last Light going on sale today, it’s worth looking at the grab-bag of DLC associated with it. While all of it is pretty cheap, time is not, and only some of Last Light’s extra levels are really worth investigating. Some of these DLC packs are cringe-worthy, the kind of schlocky, half-baked ideas that give DLC a bad name and make things like season passes a bad value. On the other hand, some it is almost inspired, adding some of the systemic depth that Last Light’s campaign lacked.

So as you consider the Steam Autumn Sale, and are looking to return to the Metro, let’s look at what’s actually worth your time.

First things first, Metro was really not designed for DLC. You know how it warns you it overwrites your save whenever you restart a chapter or a new game? Yeah, that means you can’t switch between DLC chapters. If you start one, you lose your progress in the others. That’s not a big deal, usually, but it’s a major problem for special challenges like the scavenger-hunt mission or the wave-defense mission.

This is the DLC pack the illustrates the major problems with a lot of the DLC we end up getting. It follows the adventures of supporting characters in Metro, to see what they were up to during Artyom’s own adventure, but the problem is there’s no narrative suspense. We know what happens in this game, and trying to retcon exciting adventures into the story that nobody else ever refers to just ends up feeling hollow.

The perfect example is Anna’s mission. It is literally just a scene from the original game from a different perspective, where you sit in a sniper perch and pick off monsters while Artyom walks around below. Then he gets captured and Anna must try to rescue him… except we know she can’t. So really, you just snipe some monsters, then murder some bad guys in a tiny stealth / combat arena.

The mission with commie spy Pavel is much better with a great mix of tough stealth environments and full-on combat sequences. However, it also has some awful checkpointing that led me to rage-quit at one point.

I’m more ambivalent about Khan’s mission, which is at once deeply affecting… and is also a warmed over remake of the “Ghosts” level from the original game. You go on an adventure with Ranger-mystic Khan, and end up revisiting Khan’s past. Once again you go through a train tunnel full of ghosts, encounter an Anomaly, and finally come to a scene from Khan’s past. The payoff is at the end, when Khan sits down among the ghosts haunting the Metro and himself. But overall the level serves as a reminder of how much magic and mystery there was in Metro 2033 that didn’t quite make it into Last Light.

This features some curiosities like a showroom for character models, a weapons range (who cares?) and The Spider’s Nest. That last is the only real gameplay on offer here, and it’s pretty awful. It starts as a bit of a noir story: three buddies go in search of treasure in the Metro, certain they’ll know just the place to strike it rich.

Cut to: two of them are dead, and you are trapped in a giant bunker overrun with spiders. That when the fun ends ,because it’s a gross slog from there. Because, you know, the world just did not have enough dark, dank dungeon levels filled with spiders, a perennially fascinating enemy. 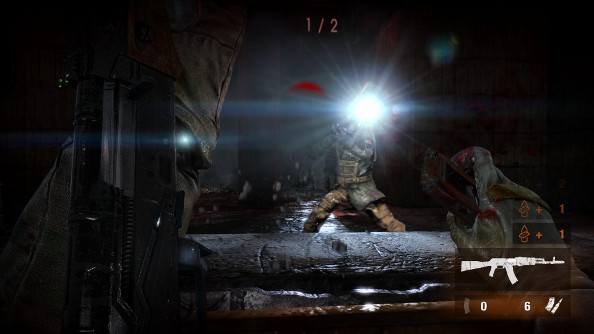 There are two major problems with the idea of a wave-defense mode in a Metro game that the Tower Pack provides. First, if you think about it, Metro doesn’t really have the most interesting menagerie of enemies. There are humans with guns, then a bunch of mutants that charge at you with varying degrees of agility and power, and then there are special environmental enemies like the airborne Demons. But none of these really lend themselves to the wave-defense game. It’s not really how Metro is designed, unlike the varied enemies and tactics you see from enemies in games like Gears of War or even Mass Effect 3.

The second problem is execution. There is no multiplayer in Metro: Last Light, so you’re on your own in each of these defenses. You’re given scant seconds to prepare, so there’s no time to study the battlefield and learn how to utilize it. So really, once the enemies start coming, it’s just down to how quickly and efficiently you can put them down. That does not make for a good wave defense game. 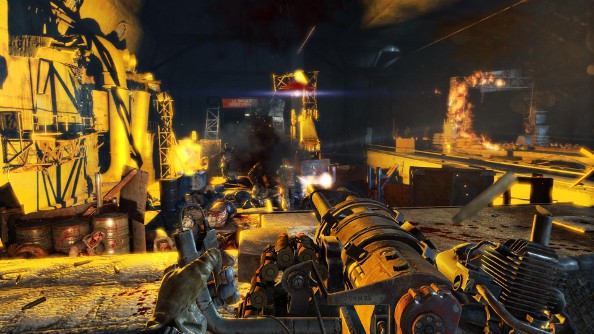 Factions runs the gamut. It has the dubious distinction of being the only time in the Metro series where you get to play as a Nazi stormtrooper, and fittingly enough, it’s a deeply unpleasant experience. It’s a shooting-gallery level where you try and hold off endless hordes of Reds with the help of high-end weaponry. Because there is no cover to speak of, it comes down to memorization, so the entire thing gets old quickly.

The Sniper Team mission with the Reds is more fun. It shows off some of Metro: Last Light’s beautiful weather and lighting, and it’s good fun murdering the hell out of Nazis with silenced submachine guns and sniper rifles. But it also highlights just how abysmal the stealth design can be, with Metro’s trademark blind, deaf guards practically stepping over one another’s corpses without raising the alarm.

But the crown jewel is Kshatriya, named for the elite Polis Rangers who trawl the surface looking for valuable artifacts. It is also a the finest demonstration of what Metro: Last Light did wrong. 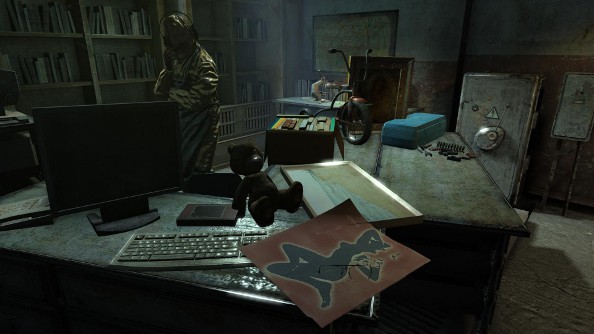 Kshatriya is easily most systemically interesting thing in Metro: Last Light. You start in a Ranger base near the Library, where you can buy gear and ammo for a trek to the surface. Once you’re ready to head out, they lift the airlock doors and send you into the sewers to make your way into the Library. Along the way, you collect valuable artifacts, which you then bring back to the base and sell.

For the first and only time in Last Light, the ammo-economy actually seems to work. The first forays are quick trips as you grab some easy treasures, open up new pathways, and clear out some monsters. But each ranging requires a longer, more difficult trip and additional supplies. Since you’re on a timer, limited by the number of air-filters you bought beforehand, there are times when suddenly you’re out of standard ammo but cannot afford to turn back. But if you start blowing through the military grade ammo, you’ll have a harder time kitting-out for the next trip.

It’s also everything that made the first game so good, which is unsurprising since it is basically a remake of one of that game’s most interesting levels. It’s not a combat challenge, it’s a survival challenge in the way the STALKER games are about survival. It’s about balancing speed and safety, knowing when to fight and when to run, and what gear you’ll need to survive.

The rest of Last Light never trusts you to figure it out for yourself in the way the first game did. It never trusts players to enjoy the game enough to overcome setbacks or confusion. It railroads players from beginning to end, always ensuring that they have the right tools at hand for the obvious job at hand. But Kshatriya is a return to what was always so interesting about Metro: the challenge of survival in this dangerous, beautiful ruin of a world.