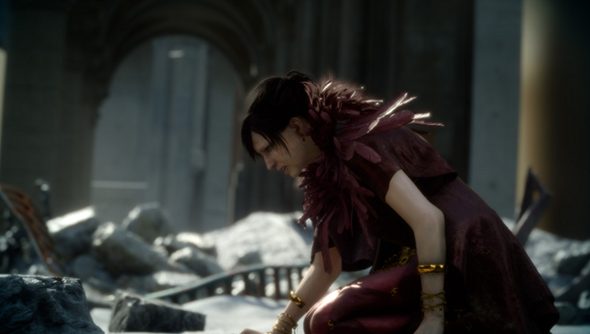 Nvidia, Square Enix and Microsoft have teamed up to lead games out of the uncanny valley by making a digital woman cry. Don’t worry, it’s all for science! Apparently it’s a tricky challenge, recreating sobbing digitally. But DirectX 12 is leading the way in fake salty tear manufacturing.

We’re obviously not out of uncanny valley yet, but crikey is this a big step. The wracking sobs are unnervingly realistic, and it doesn’t for a second look like in-game footage, until the camera is switched to manual and it’s revealed to be exactly that.

That hair, gosh it’s lovely. Video game hair remains mostly awful, like ugly plastic wigs, but this is something else entirely.

“WITCH CHAPTER 0 [cry] features the most ambitious real-time, cinematic-quality graphics ever undertaken,” said Jen-Hsun Huang, Nvidia head honcho. “Square Enix’s achievement is nothing short of breathtaking. I am delighted that their amazing team turned to [Nvidia] to help bring WITCH CHAPTER 0 [cry] to life. This is a preview of the beauty and artistry of video games to come.”