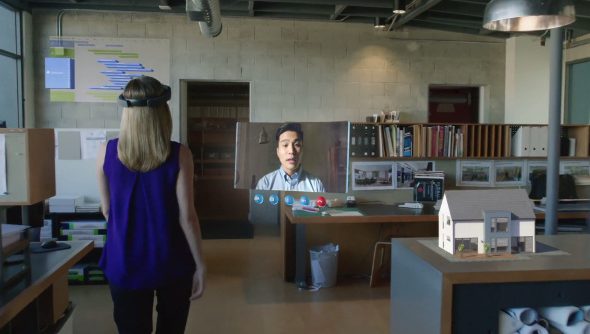 At Microsoft’s Windows 10 event, the company revealed their addition to the small but growing list of things you can slap on your face. The HoloLens is an augmented reality headset, which might double as a pair of skiing goggles, that can plonk graphics, from a Skype call to a Minecraft creation, on top of your environment.

It’s more like Google Glass – which was recently put on ice – than the Oculus Rift. The HoloLens will use an OS tailored for AR, Windows Holographic, and Microsoft says that it will be an important part of Microsoft’s future.

It’s certainly an interesting novelty, but Microsoft will probably need to overcome the same problem that Google has had to deal with – how do you get people to wear your glasses without making them look ridiculous.

Yeah, nobody is going to want to be wandering around the office or the kitchen with that strapped to their face. But it’s still a work in progress, so there’s plenty of time to make it look less like something from a cheap ‘80s sci-fi flick.

Microsoft says that the HoloLens will be out at some point during Windows 10’s lifecycle.