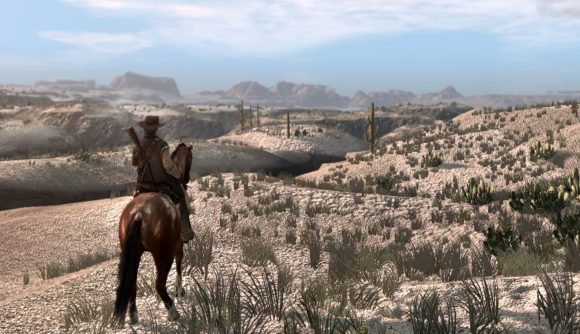 Back at E3 2018 Microsoft announced it was creating a new game studio, The Initiative, to be based in Santa Monica, California. Among other big names hired for the studio and working on a mysterious new title was Red Dead Redemption’s lead writer and designer, Christian Cantamessa, as a narrative consultant. It’s not yet clear what this game might be, but head of Xbox Phil Spencer has now provided an idea – sort of.

On his Twitter channel (via GameSpot) Spencer has provided a somewhat cryptic update on the title: “Great update today with Darrell Gallagher [The Initiative studio head], Matt Booty, [head of Microsoft Studios], and the team at The Initiative. Incredibly talented studio challenging themselves to do new things things (and old things) in new ways.” He adds a little smiley face alongside “and old things”, cheekily suggesting there’s a significance to this.

While this doesn’t give away anything in terms of detail, it does perhaps hint that the new studio could be working on some kind of reboot, sequel, or spin-off of a long-running – or “old” – series. This is naturally far from confirmed but it does possibly give us an idea of the general direction the studio’s working towards, bringing together “new things” and “old things”.

Design director at The Initiative Drew Murray also recently tweeted an update about the game’s progress.

Great update today with @DGallagher_LA @mattbooty and the team @TheInitiative. Incredibly talented studio challenging themselves to do new things things (and old things 🙂 ) in new ways.

In it, he said he was “headed to The Mothership Microsoft [and] Xbox”, adding he was “excited to get the game hammered on a bit”. A couple of days later he praised the team at The Initiative for “doing a bang-up job making lightning-fast changes to the game to try to fix issues in (almost) real-time.” He added: “The game got less wobbly these last two days…”

@TheInitiative has been doing a bang-up job making lightning-fast changes to the game to try to fix issues in (almost) real-time. The game got less wobbly these last two days….

So, it seems there’s nothing concrete revealed about what the game might be just yet but it seems from these tweets it’s making some good progress – whatever it is.