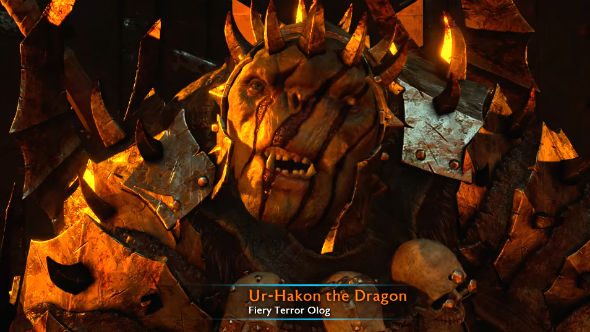 Those chaps at Warner Bros are getting pretty good at dropping jaws, and their latest reveal for Middle-earth: Shadow of War is no exception. Turns out all that bombast and scale promised by the reveal trailer for the eagerly anticipated sequel to 2014’s Middle-earth Shadow of Mordor wasn’t overselling anything. The new gameplay reveal – which you can watch in full above – is a whopping 16 minutes of siege gameplay, showing off every new aspect of Monolith Productions’ vastly expanded Nemesis system, as well as a few of the game’s new features like loot and armour.

For more open-world antics, check out our list of the best sandbox games on PC.

The gameplay walkthrough takes us through a complete battle for a stronghold, from knocking down the gates, to setting the walls ablaze on the back of a dominated drake, culminating in a boss fight with the overlord of Fort Seregost. There’s far, far too much going on for us to break down to you in a single news post, but don’t worry as Matt’s already written a comprehensive analysis of Middle-earth: Shadow of War’s bigger, better Nemesis system for you to read through.

The addition of loot for noteworthy overlord and warchief kills is also a welcome addition, and fans of Tolkien’s world will surely get a kick out of grabbing themselves a set of Rohirrim armour, despite the multitude of lore atrocities on display elsewhere. We’ll be poring over the details for a while, so in the meantime, sit back and enjoy this 16 minute info drop from Warner Bros.