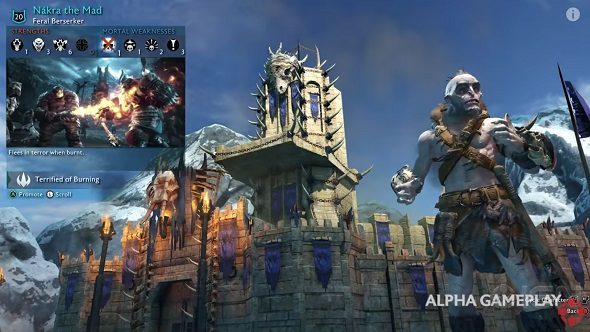 That punchy Lord of the Rings game is back, and this time it’s even punchier. Not only that, but the best thing about it has been reworked to add more meat to its bones. Yep, the Nemesis system returns, and it’s remembering even more things.

If you didn’t play the first game, the Nemesis system is basically how the game tracks your actions. If an enemy escapes a tough-fought battle with you, they’ll reference it later on. They’ll perhaps have some bandaging on their wounds, that sort of thing.

This time, the Nemesis system extends to buildings. In Middle-earth: Shadow of War, you must weaken fortresses by taking out key figures in the army beforehand. The generals guarding the fort will even influence the land surrounding it, with the traits of their clans shaping the world.

In one example, tribes have monuments dotted around, and you can destroy them to lower a clan’s influence. For some reason, you have to climb to the top of a monument then tap a button prompt – from there, our hero jumps away, throwing a spectral axe back at the structure to break it apart. It looks ridiculous, as you can see in the video above.

After the monument smashing, time jumps forward and we’ve raised an army capable of attacking the fort. We don’t get to see the battle, but your options in the aftermath are interesting. When you take out the fortress’s overlord, you can install your own in their place. Depending on who you install, it’ll change the look and mood of both the fortress and the region surrounding it.

Weirdly, the video above kinda brushes over the fact that choosing this specific type of overlord means there’s dragon bait available in the region, allowing the player to summon dragons. Yeah, you can summon dragons. Talk about burying the lede.

Of course, you can always swap out your overlord for another if you fancy billowing smokestacks instead of fire-breathing lizards.