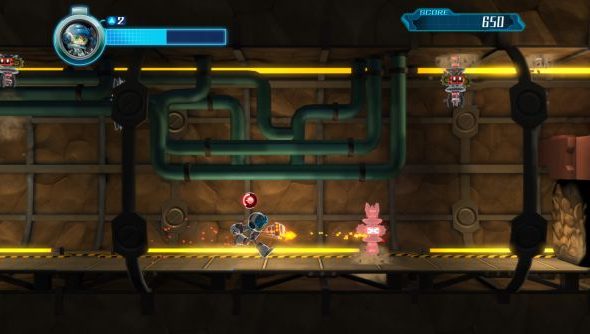 Mighty No. 9, after making a mighty amount of money on Kickstarter, has looked significantly less mighty as time has gone on. Multiple delays, confusing trailers and a long, long dev cycle have left it looking unappealing. Now it’s finally coming out to a legion of backers numbering more than 67,000.

One to scratch off the upcoming PC games list.

The launch trailer doesn’t do much to help its case.

At least they didn’t redo the anime fan on prom night line, eh?

If you want to grab the spiritual successor to Mega Man, it’s up on Steam for $19.99 / £15.99 / €19.99 – pretty cheap given the hype surrounding the Kickstarter, though it isn’t the prettiest. As for how it plays, no personal experience here, though reviews have not been as favourable as Comcept might have hoped. You can judge for yourself come tomorrow.

In the mean time, the team has also released the first episode in a documentary series filmed while the game was being made. You can watch it on the official blog.