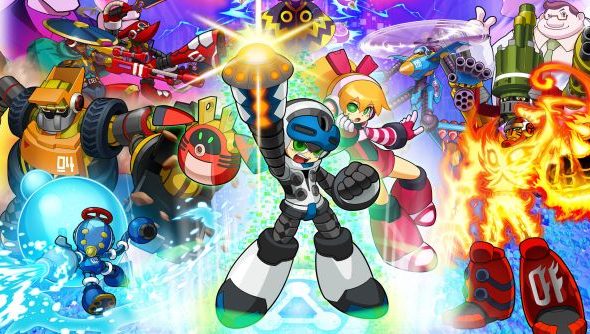 Oft-delayed Mega Man spiritual successor and Kickstarter all-star Mighty No. 9 is finally getting released on February 9th, meaning it’s about time we saw a little more of it in action. Sprinting round the corner absorbing powers as it goes comes the latest trailer, debuting alternate play modes that will be included in the base version. It also has one of the most amazing voiceovers I’ve ever heard in a trailer, for better or worse.

Q1 2016’s looking mighty busy, as you can see in our list of upcoming PC games.

Don’t say I didn’t warn you.

He seems to get braver as he goes on, embracing more fully just how ridiculous he wants to be. I respect that, even if I’d rather the music, sound effects, an unrelated orchestra or really anything else had taken center stage.

More importantly, however, the content itself is an important part of the value proposition for Mighty No. 9. Games like these take naturally to replayability with different characters and options, as well as routes through levels, but layering extras on top of that is no bad thing. Particularly something as challenge-esque as a one-HP mode or the natural fun of having a friend join you.

It’s on Steamfor pre-orders now, if you’re feeling like some 2D platformation.