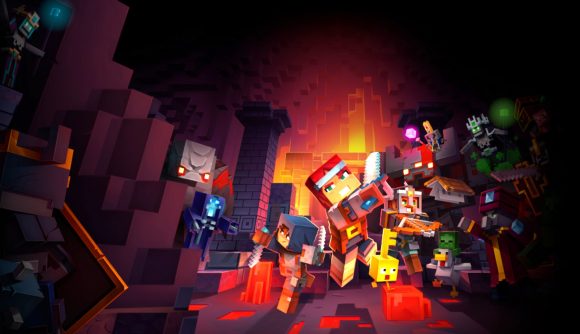 It’s coming up to a year since Mojang released its dungeon crawler Minecraft Dungeons, which has just hit a significant milestone. In a post on its website, the developer reveals that the game has been played by over ten million players, which ain’t too shabby.

To celebrate the milestone, players are getting a new cape and a pet – both good things to raise your mood in these troubled times. Mojang has also revealed what you’ve all been getting up to during your time with Minecraft Dungeons. Players have defeated the Arch-Illagerl 5,934,629 times, and we’ve all spent a combined total of 1141 years in camp – cosy. The Redstone Monstrosity has also been beaten a total of 7,044,521 times in exactly 19,511,994 attempts.

We also found out recently that Minecraft Dungeons’ Flames of the Nether DLC is set to arrive on February 24 alongside a free content update. The DLC comes with six new missions that’ll take you to biomes both old and new. There will also be new artefacts, weapons, and gear to scour for, as is the Diablo way. You’re also getting some new skins and a pet to further customise your appearance.

If you’re looking for something new to try, our new PC games of 2021 list will point you towards what you should be downloading.