Played solo, Minecraft Dungeons feels a little thin. It’s luxuriously produced, sure, and there’s a good dollop of Content lurking within the package, but the business of hacking away at the game’s charming, increasingly sturdy cast of enemies quickly becomes wearing on your own. That’s not to say it isn’t fun in short bursts, just somewhat repetitive.

Part of that’s down to the mixed blessing that is procedurally generated levels. Dungeons’ small selection of levels is designed to be replayed, and return visits surprise and disorient in pleasant ways. But there’s something jarring about the prominent absence of handcrafting in any game that uses algorithms to construct its spaces.

That’s a technical constraint rather than any shortcoming on the devs’ part – show me the brave soul who champions Bloodborne’s chalice dungeons over the main game and I’ll show you an individual on the wrong side of history. Within these parameters, however, Mojang has conjured up a characterful hack-and-slash.

While levels are procedurally generated and different every time, they all draw from the same template.

You’ll spend most of your time exploring and fighting through armies of mobs, but this is punctuated by ambushes during which antagonist Arch-Illager hurls waves of enemies and mini-bosses at you; gentle puzzles in which you must find colour-coded keys to open doors (if you get hit, the key will start walking back to where you found it, reasonably electing to avoid all the danger); and gated arenas in which you have to, for example, liberate a certain number of villagers or destroy a set amount of brews before you can continue. 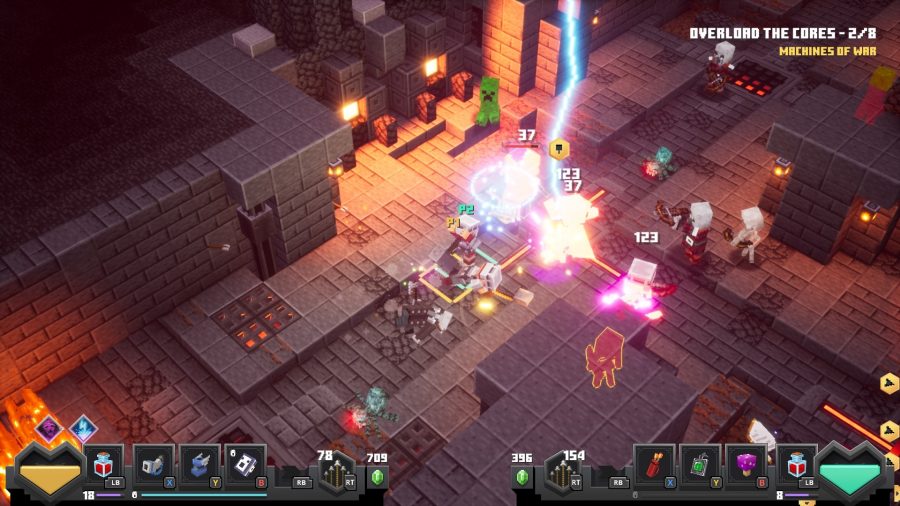 It looks the part, too. The jump to Unreal Engine has resulted in a gorgeous-looking game, saturated with soft lighting, rich textures, and showering particle effects. Once you get past the first couple of levels, it’s common to see dozens of enemies on screen, along with everything they’re throwing at you. There’s also something striking about seeing familiar creatures and block types from this new perspective, and rendered so sumptuously – each time you spot a favourite feels like a little celebrity cameo.

Those particle effects are put to good use as you level up. There’s a wide variety of weapons to wield, both melee and ranged, and these are augmented by Enchantments – which are randomised for each new item – and Artifacts. You add the former to weapons and armour by spending points earned for leveling up. Some items have space for one Enchantment, while others can be imbued with up to three, each of which has three increasingly powerful (and more expensive) tiers.

Chains, for example, has a 30% chance of binding mobs together for a short duration, while Fire Trail leaves exactly that behind you each time you roll. My personal favourite so far, however, is Fuse Shot, which adds an explosive arrow to your quiver every few shots and gives large groups of mobs something to worry about. 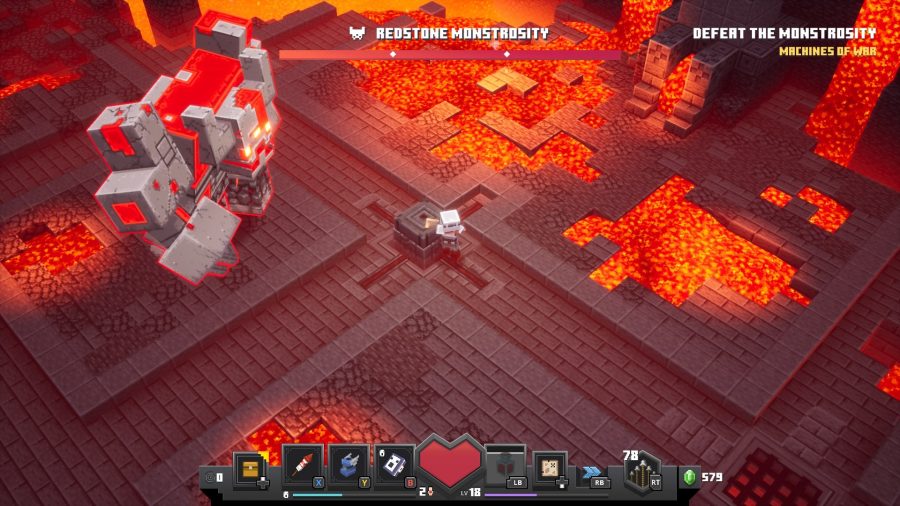 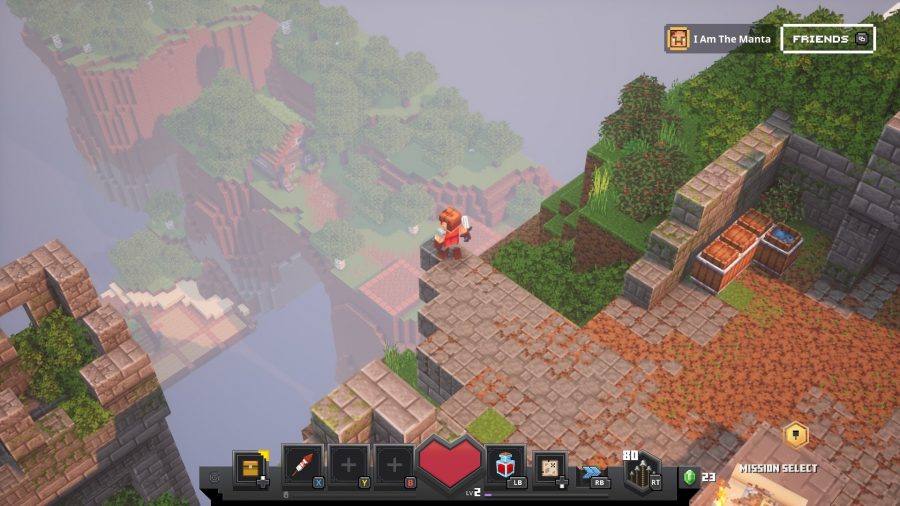 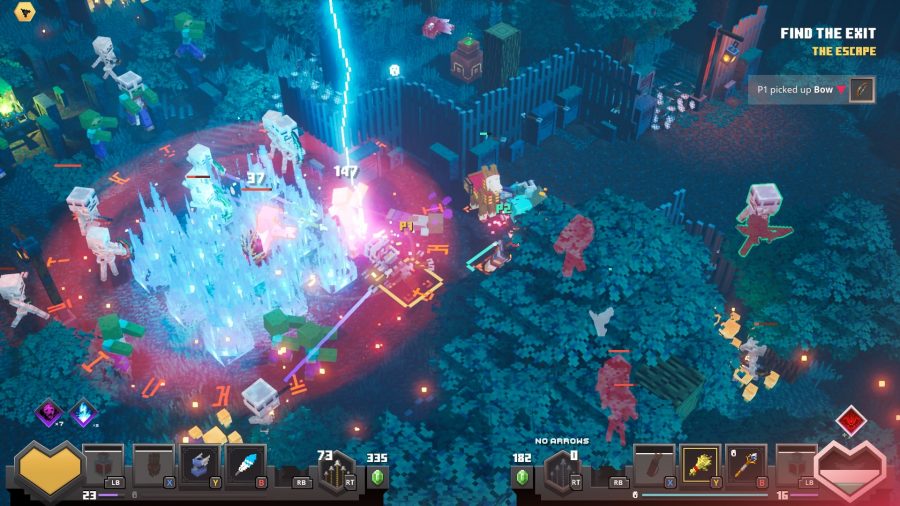 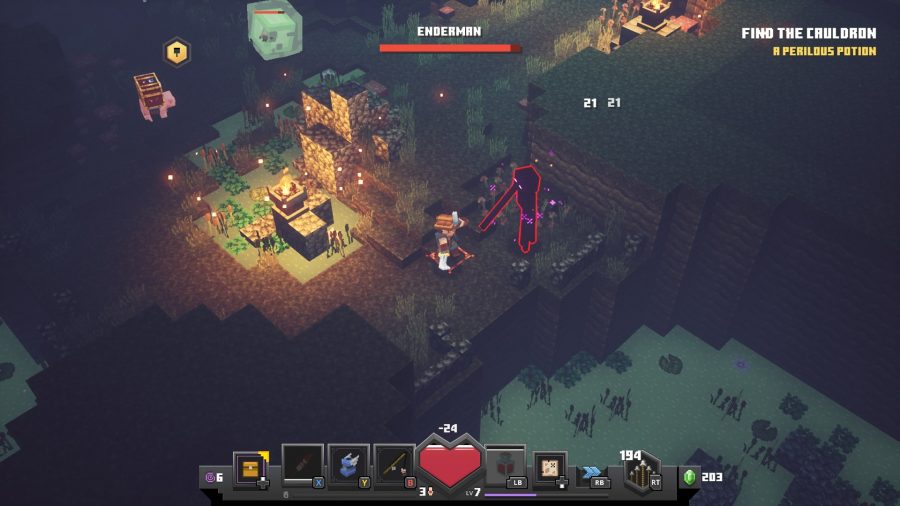 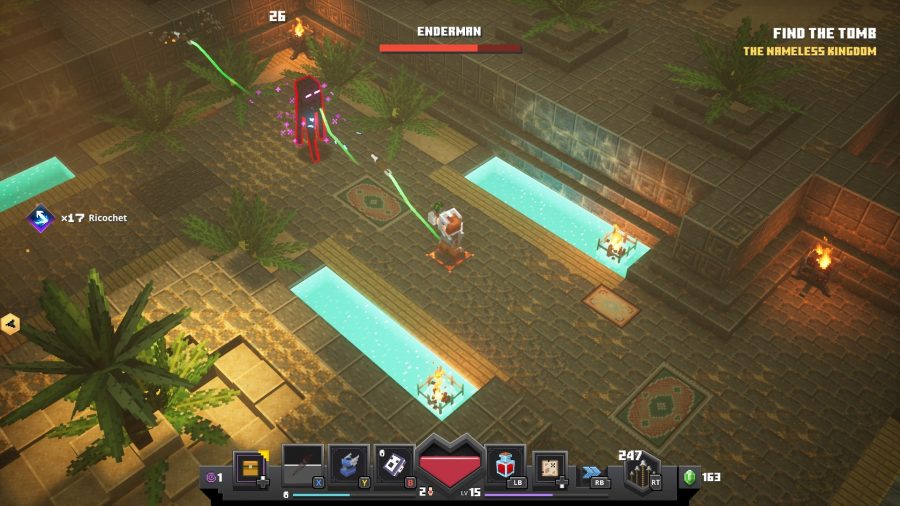 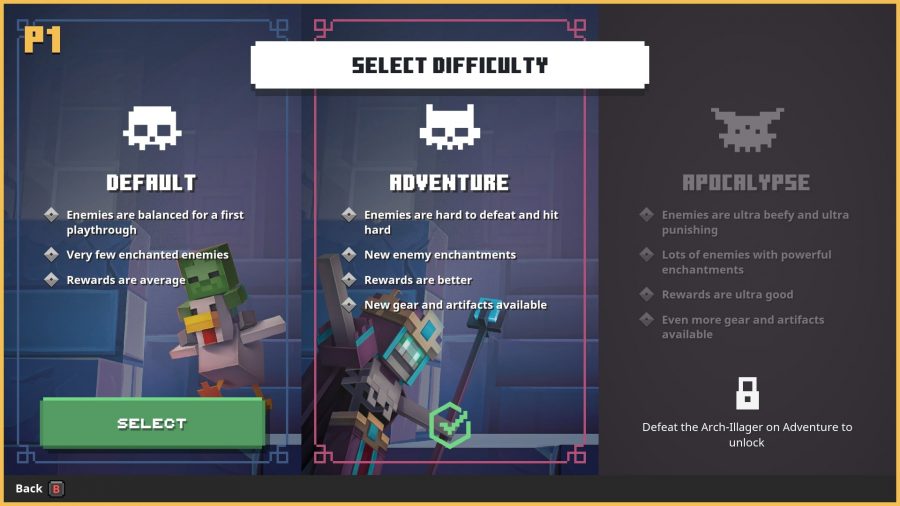 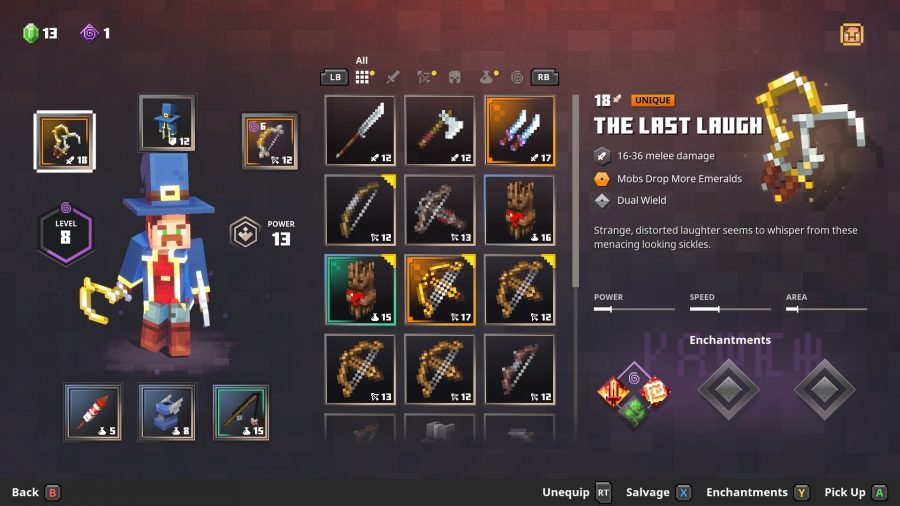 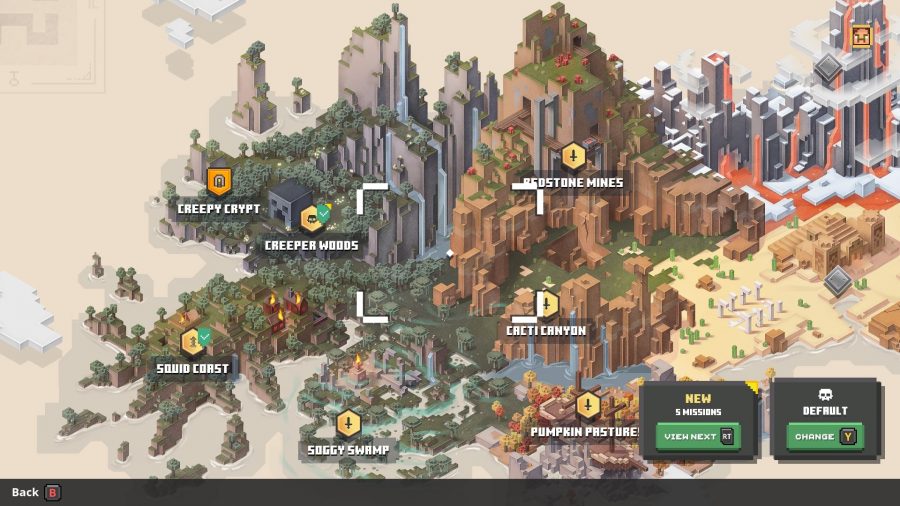 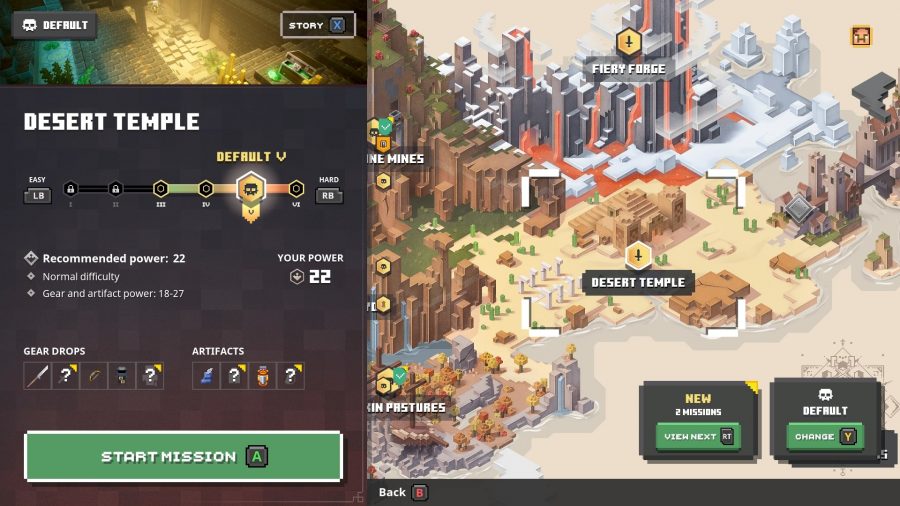 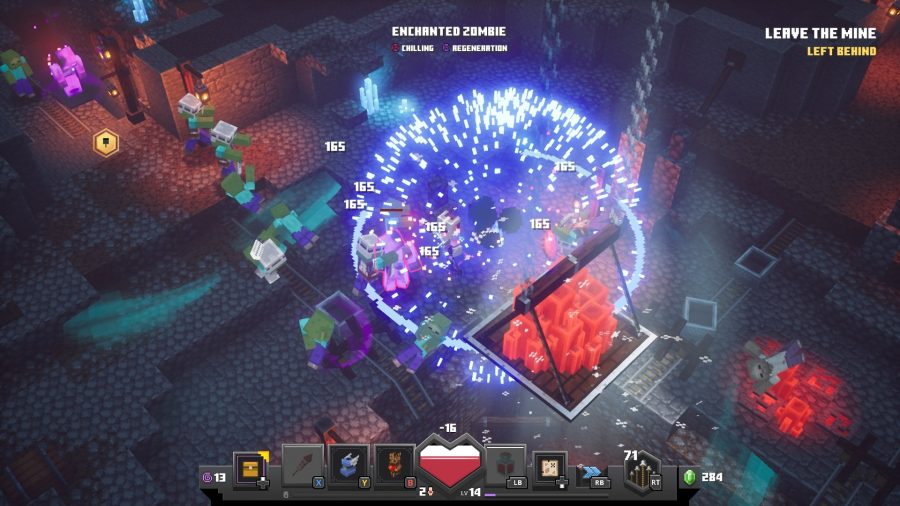 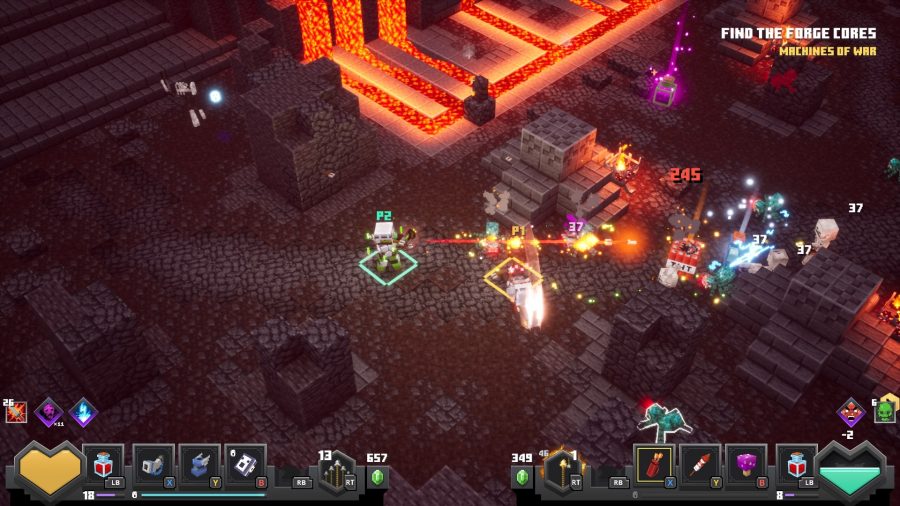 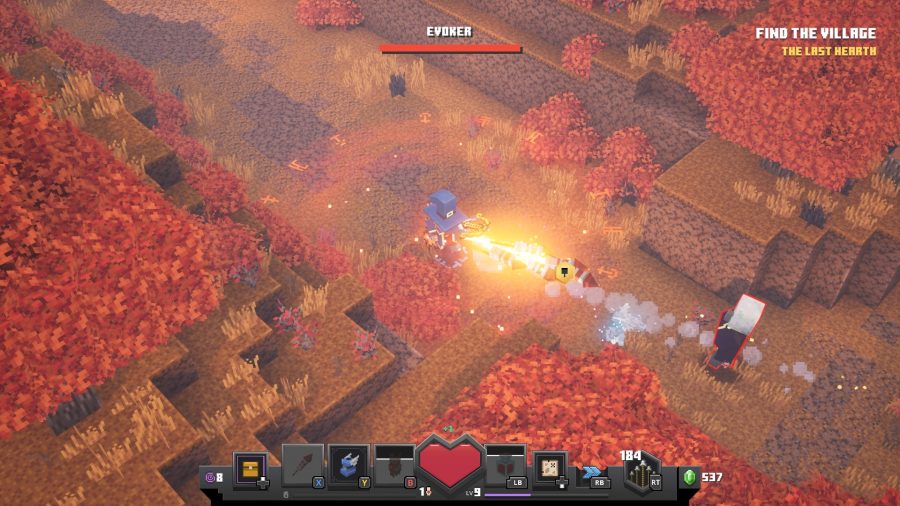 Artifacts are castable powers bound to cooldown timers. You can have up to three equipped and they include such jolly toys as: Wonderful Wheat, which summons a friendly llama to fight alongside you; the Totem of Regeneration, which radiates a circle of warmth, healing every player stood within it; and the Fishing Rod, which reels in enemies and leaves them stunned (presumably at your angling skills) for just long enough to finish them off. As with weapons and armour, all of these come in a variety of power levels which change the duration or potency of their status effects.

Your sorties all start from a mountaintop camp. It’ll gradually expand as you progress through the game’s levels, and includes a lovely little house, a map from which you can choose missions, some straw dummies to practice your weapon skills on, and a trader and blacksmith who will give you random Artifacts and items in exchange for emeralds.

It’s in the well-judged combination of Enchantments and Artifacts, specifically during co-op play, that Dungeons’ potential begins to reveal itself. As you can mix and match whatever you like (and recycle Enchantment points whenever you find a new weapon), it’s possible to engineer different class combinations on the fly. Mobs that feel overwhelming in single-player become a joy to corral and hector with friends, and the same is true of the hulking arrow-sponge bosses.

But while it’s certainly a laugh, I don’t think Mojang’s intended market is me and my Siege mates. Rather, Dungeons seems squarely targeted at the yoofs who gorge on Minecraft streamer content and love the idea of dungeon crawling, but maybe aren’t ready for the complexities of Diablo just yet. This theory is lent credence when I spend a couple of joyful hours playing it with my six-year-old son. He’s obsessed with Minecraft, and delighted that we’re getting to play the game early and experience Mojang’s blocky world in a new way. 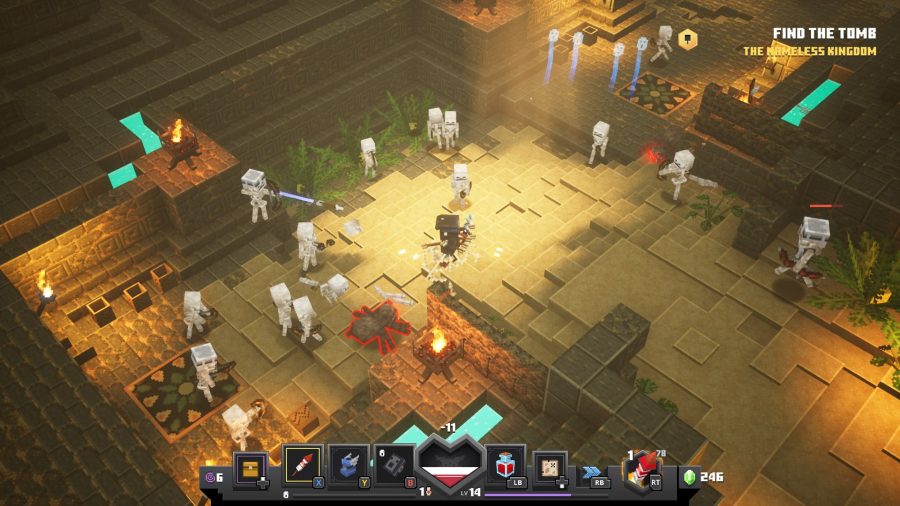 The highly adjustable difficulty, recharging health potions, fairytale-esque story narration that bookends each level, and, well, repetition all feel perfectly pitched in this context. When I ask what he thinks of the game my son replies, “I think it’s very well designed, and the first level is easy, but the second level is hard, and my favourite things are the stone boss and the Enderman boss”. And who am I, of all people, to argue? (It should be noted, too, that he underscored his very reasonable points with some evocative mime work that even Monkey Island’s Stan would be proud of.)

All of which leaves me in a bit of a quandary when it comes to pinning a number to the end of this otherwise nuanced discussion. Soloing grownups are likely to find Dungeons unsatisfying, for the most part – though that’s not to say it doesn’t hit all of the right dopamine switches with its levelling and loot systems – while raid parties will probably have a grand old time, at least for a while.

And if you happen to have any pre-teen allies who are dear to you, then you’ll experience the game at its most magical. If you’re lucky enough to fall into the latter camp, then whack another point on the score below.

A stripped down Diablo that oozes charm and loot variety but is probably better suited to a younger audience.