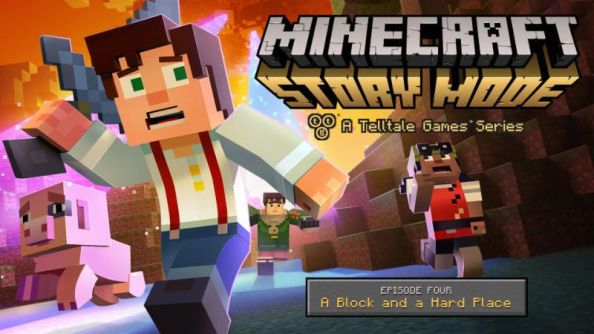 Story Mode is Telltale’s officially licensed, Mojang-affiliated Minecraft videogame, which is notable in itself in a world waist-deep in knock-off creeper t-shirts. More than that, it’s freed the celebrated Walking Dead studio somewhat from their usual template – allowing them to build a knowing and sassy interpretation of Mojang’s silent world.

There are five episodes planned – but oddly, Telltale say the current storyline will wrap up in Christmas’ episode four.

Think you’d rather curate your own blocky adventure? Here are the very best Minecraft mods.

A Block and a Hard Place will come to Steam on Tuesday, December 22nd. It’ll bring an end, one way or the other, to the resilient force of evil that’s plagued previous episodes, the Wither Storm.

However, we’re told to expect a “mysterious fifth episode” for Minecraft: Story Mode sometime in 2016. It’s too early to say what its role will be. Have you stuck with Telltale’s most bright-eyed adventure yet?