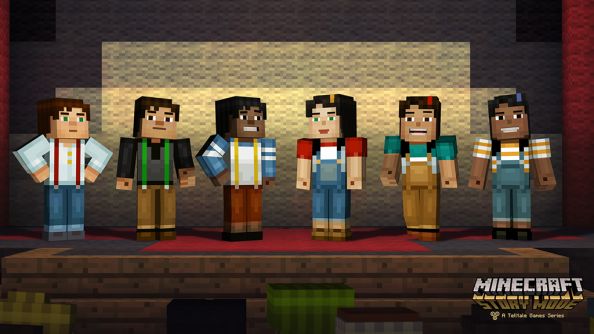 Telltale know that if you want to ingratiate yourselves with the Minecraft community, you have to go big. YouTubers, streamers and Telltale fans convened with a big chunk of Mojang’s most devoted last night for the ‘World’s Largest Let’s Play’ – a public screening of Minecraft: Story Mode in Hollywood’s ArcLight Cinerama Dome.

In scenes reminiscent of digital pantomime, the packed theatre cheered and screamed along with the trials of the Order of the Stone in the rather good Minecraft: Story Mode – Episode 1 as they played out on a gigantic screen.

This is what a full theater of Minecraft fans sounds like @telltalegames @Mojang @Minecraft @YouTubeGaming pic.twitter.com/3k1FS5g0E2

The audience did their best to direct the decisions made in Telltale’s interactive adventure. The resulting cacophony sounded something like Twitch Plays the Rocky Horror Picture Show.

Telltale have done crowd play events before – notably with Tales from the Borderlands at PAX Prime. But you have to imagine this is their youngest and most enthusiastic crowd yet.

Minecraft: Story Mode’s first episode, The Order of the Stone, is out today on PC and Mac. Think you’ll grab a pick and tap your way through some tough decisions?