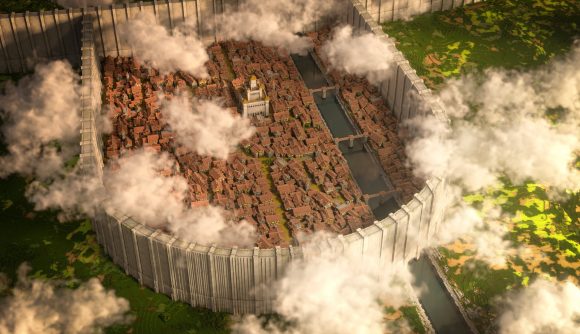 Looking at the Minecraft community often makes me wonder if I should be more productive with my time. Recently someone recreated Mount Everest to 1:1 scale just so they could climb it on stream – it took four hours, in case you’re curious. Now, though, a group of Minecraft players have recreated Attack on Titan’s Shiganshina city to 1:1 scale.

Reddit user FoxicalOW shared the creation to Reddit, and it’s staggeringly detailed. While Shiganshina has been recreated to 1:1 scale, the team altered some of the proportions to make it look better. They doubled the wall’s size from 50 to 100 blocks so the houses could be taller than eight blocks. The map isn’t available to download just yet, but FoxicalOW does say he’ll upload it soon for Minecraft Java on PC.

He goes on to explain on Twitter that he used a Builder’s Refuge to help them accomplish the feat. The service offers a community server which consists of small 75×75 and oversized 501×501 plots alongside heaps of build tools such as WorldEdit, VoxelSniper, goPaint, and more.

You can see the map in all its glory below:

I built Attack on Titan’s Shiganshina 1:1 in Minecraft from Minecraft

If you’re looking for some more Minecraft maps to check out, you know where to click.