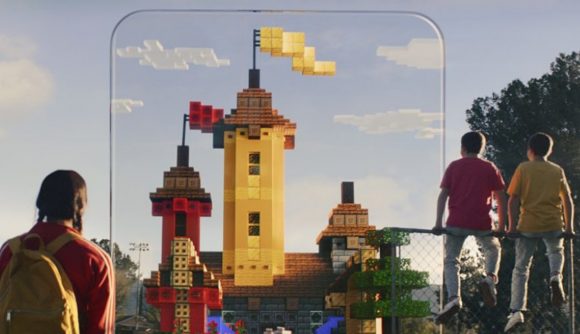 Minecraft Earth was Mojang’s take on Pokémon Go, a mobile spin-off that let you experience a familiar world through the gentle magic of augmented reality. The fact that I’m using past tense here should probably tip you off, however, that Minecraft’s take on the formula has not been as popular as Pokémon’s. Minecraft Earth has received its final update, and will be shutting down just under two years after its initial launch.

“Minecraft Earth was designed around free movement and collaborative play – two things that have become near impossible in the current global situation,” the developers say in the announcement. “As a result, we have made the difficult decision to re-allocate our resources to other areas that provide value to the Minecraft community and to end support for Minecraft Earth in June 2021.”

So yes, COVID-19 essentially ended Minecraft Earth. (Just like the XFL.) Pokémon Go had to make a number of adjustments to reflect our new ‘you should probably stay inside’ reality, allowing players to more easily engage with the game’s systems from home.

Minecraft Earth officially shuts down on June 30, 2021. After that point, it will no longer be available to download or play. Player data will be deleted on July 1.

Today, January 5, marked Minecraft Earth’s final update, which removed real-money transactions, and reduced costs and time requirements for a number of features to help players see everything the game has left to offer.

If you’ve ever purchased anything in Minecraft Earth, you’ll get a free copy of Minecraft: Bedrock Edition for your trouble. Additionally, any ruby balance you’ve got on your account will be converted to Minecoins, which you can use to make purchases on the Marketplace.

Minecraft itself, of course, is nowhere near shutting down, despite persistent nonsense from various corners of the internet. The Minecraft 1.17 update is on the way later this year.