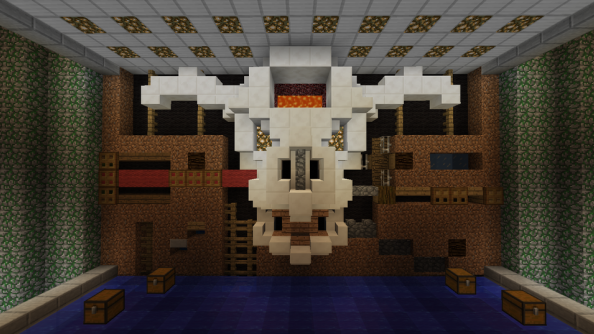 Make no mistake: for John Carmack, VR is about the holodeck – exploring virtual places, steering your own story – and for that not much compares to Minecraft. The father of first-person gaming believes that Minecraft is the “single most important application that we can do for virtual reality”, and has spent the last year and a half personally making it happen.

The deal between Mojang, Microsoft and Oculus was announced on Thursday – Minecraft on Windows 10 will have Oculus Rift support. Carmack calls it his “grail” – a step it’s so important that he would have cried if it hadn’t come together.

“Minecraft was my quest,” he told the audience of his Oculus Connect keynote. “Really for the last year and a half, before Gear VR even existed, Minecraft was something that I was desperate to get into virtual reality because I thought it would be critically important.”

One aspect of that was purely technical – Carmack had watched his kids play the C++ Pocket Edition version of Minecraft for tablets and phones, and thought it would be perfect for Oculus’ mobile headset, the Gear VR.

We already know what happened next: Notch was invited to Oculus, chatted to Carmack about “geeky programmer” stuff, and provisionally agreed to a Minecraft port. But then, famously, he felt betrayed by the Oculus Facebook acquisition and cancelled his plans. By the time he’d come around, he was selling the game to Microsoft. Carmack, however, wouldn’t stop calling Mojang.

“I would just drive home this case about, ‘Look, we don’t want to ask anything from you, just let me try to build this and if you think it’s cool we’ll figure out what we want to do from there. I am so confident that it’ll be cool that I’ll agree to just about anything here’.”

And Carmack did, working under a deal that horrified his lawyers.

“This is terrible, they own everything you do, there’s no recourse any of this will happen,” they said, according to Carmack. “John, you’re basically working for Microsoft when you’re working on this.”

He ploughed ahead anyway, tackling performance and anti-aliasing problems and playing “more hours of Minecraft in Gear VR than probably all the other Gear VR games that I’ve played put together”.

The deal was finalised only on Thursday morning, at 12:35am, before the Connect keynote.

“It was really, really down to the wire,” said Carmack. “On the phone I said, ‘If this doesn’t happen I’m going to cry. This will just be so terrible, because this is amazing, this is going to be the best thing we can do for the platform.’”

In the end, it took two CEOs sitting down together to make Minecraft VR happen (“There are some problems compilers can’t solve,” mused Carmack).

“I think it’s the single most important application that we can do for virtual reality, to make sure that we have an army of fanatic, passionate supporters that will advocate why VR is great,” he concluded. “This is why you want to do some of it every single day. It’s part of this infinite playability that we’re currently lacking in our current set of titles.

“Everyone has memories of playing games, but I have memories about actually being inside [Minecraft] – about coming up to a shoreline or being lost deep underground, low on supplies, and that sense of being there. As far as my brain’s concerned, that was something that happened to me – I was there.”