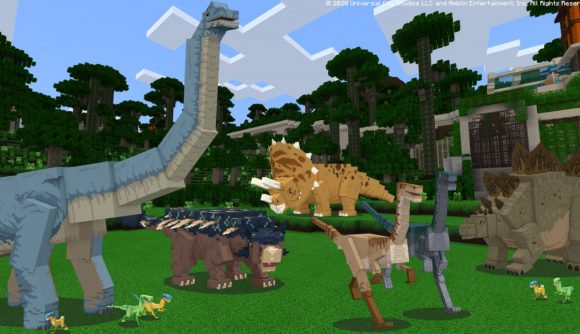 Modders have been bringing Minecraft and Jurassic Park together for ages through projects like JurassiCraft, but now Mojang is making the crossover official with a Jurassic World-themed DLC pack. It’s out right now on the Minecraft Marketplace, and adds 60 dinosaurs and 21 skins to the game. Everyone’s also getting a free hoodie in the character creator themed after the raptor Blue.

You can grab the Jurassic World DLC for $7.99 USD in the marketplace. As the official description explains, “not only can you craft and train dinosaurs, build exhibits, and solve problems, but you can also go on expeditions to discover dinosaur DNA! Use vehicles and your team of NPCs to solve disasters and earn a high score!”

The trailer shows a pretty impressive expansion, with loads of drivable vehicles including helicopters, vans, and four-wheelers, on top of the impressively-animated dinosaurs – well, as impressive as animation can get in Minecraft, at least.

If you’re looking for more dinosaur games – or perhaps some cool Minecraft seeds – you know where to click.