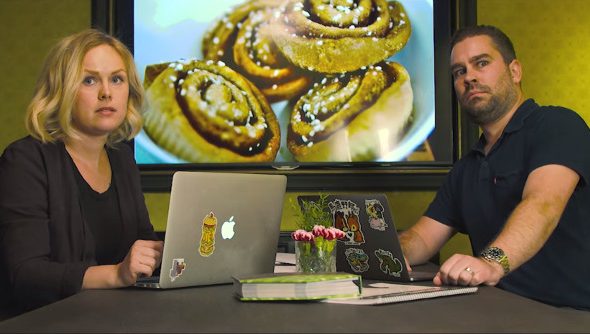 Minecraft is an all-conquering, world-devouring beast, or so we thought. Turns out it hadn’t yet made it to the computers of 1.357 billion-person China, but a new deal has been struck between Mojang and Netease, Inc., an internet technology company in the country to distribute the block-based survive ‘n’ build-em-up. The plan is to develop a new version “tailored for the Chinese market” – presumably abiding by all their specific laws on what can and can’t be shown in a game.

Here from beyond the Great Firewall? Here’s the best Minecraft seeds we could find.

In celebration, Mojang have made a video. It’s not a trailer, containing no game footage, but it does feature director of communications Owen Hill and office manager Siri Andersson trying their very best acting. Plus: Minecraft lead designer Jens Bergensten doing, er, martial arts.

Right. Well. Let’s … just ignore the fact Mojang seems to exist in a parody of the previous century, shall we? That seems easiest.

In a more sensible reality, Jonas Martensson, CEO of Mojang, had this to say about the move:

“We’ll always embrace opportunities to bring Minecraft to new players around the world, widening our community, and giving us a new perspective on our game. NetEase understand our long-term vision for Minecraft and support Mojang’s ideals, so we’re delighted to have them on board. We look forward to welcoming China’s builders and adventurers to the world of Minecraft.”

It’s anyone’s guess what will change, but as a game featuring all manner of zombies, skeletons and various other gribblies, chances are some of that will be getting a texture makeover to be more appealing to the Chinese public and less, well, illegal. The business model is also in flux, with free to play being far more common over in that part of the world.

Full announcement over on the Mojang site. Plus you can watch that video again. If you like you strange, strange person.