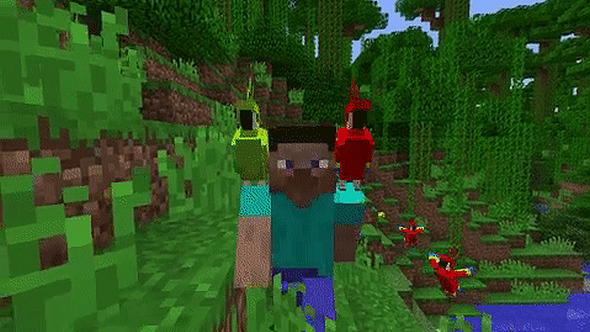 In Minecraft, you currently tame and breed parrots by feeding them chocolate chip cookies. In real life, chocolate might kill them. Lots of children play Minecraft, at least some of whom might have pet parrots.

Create a friendly world for your chocolate-resistant super-parrots with our list of the best Minecraft seeds.

I’m sure you can see a problem here, and so did Reddit user 1jl, whopointed it out in a post that became the most upvoted of all time on the Minecraft subreddit (with over 37,000 upvotes).

Seeing this,Vice’s Motherboard drew it to the attention of Minecraft devs Mojang. Lead creative designer Jens Bergenstern then told Vice via email that they will change the parrot-breeding item before Minecraft’s forthcoming 1.12 update is released.

“If Minecraft has any effect on children’s behavior, we want it to be a positive one,” says Bergensten. “Our reasoning for originally using cookies was twofold; it gave cookies a reason to exist within Minecraft, and it was a subtle reference to the Nirvana song ‘Polly.’ However, we didn’t consider what the chocolate ingredient would mean to real life parrots!”

The 1.12 update currently has no release date, but is expected “soon”. If the parrot food is due to be changed before then, I guess that means it’s coming sooner than soon.