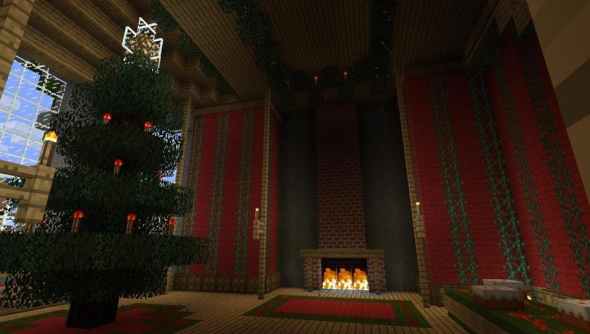 That’s right, a handful of bug fixes are in the snapshot update, which you can find here. The game has also been tweaked so that the possibility of monsters spawning with armor now scales according to the difficulty level you’re playing at. Once again, don’t forget to read our guide if you’ve never installed a Minecraft snapshot before.

Now, there’s a wee seasonal spoiler in this post, so if you don’t want to know what Minecraft might have in store for players over the holiday period, then I’d suggest you pass on by and take a look at all the fantastic features posted up by my colleagues. For example, did you know you can play Red Orchestra 2 this weekend?

Okay, are they gone? Very well then. Looks like we’re the crowd who don’t mind having Christmas spoiled. Follow me past the break.

Resourceful redditors have found that, for those running the yesterday’s snapshot, Minecraft will become particularly festive on December 25. Crates will be transformed into presents, thusly: The same thread also plays host to a rumour that Mojang have tried to implement skis in the game and that these were going to be in the next snapshot, until Nathan “Dinnerbone” Adams decided they weren’t quite working. This was according to an exchange on the IRC network QuakeNet.

How credible is this? I would take it with a pinch of salt, but when they released yesterday’s snapshot, Mojang did say that another pre-Christmas update was to follow. Given how much they like suprising their players, I think it’s a safe bet to say there’s going to be something more to look out for. Watch this space.