Minecraft VR wasn’t conceived by the team at Mojang. It was dreamed up by Oculus’ John Carmack, who personally ported the Windows 10 version of the game to the Gear VR after watching his kids playing the game on their mobiles and deciding it was the ideal game for the device. Six months later, Carmack invited then Minecraft lead designer Markus Persson (Notch to you and I) to Oculus and the two agreed on a Minecraft port. Two years later, the Windows 10 version of Minecraft is playable on both the Gear VR and the Oculus Rift headsets. Carmack’s port was nominally shippable: it just needed cleaning and polishing, two years of it to be precise.

Already got yourself a pair of expensive goggles? Check out the best VR games on PC.

The reason for that lengthy gap? Mojang wanted the game to be playable over a long duration. “When we started we told Oculus we wanted hour-long sessions,” explains Mojang studio director Michael ‘Saxs’ Persson at Minecon 2016. “They said that’s not possible, nobody has hour-long sessions. I said, ‘Well, then we shouldn’t make it then’. That’s the only realistic way you can play Minecraft. We didn’t want a viewer, we didn’t want something where you couldn’t interact with the world, we actually wanted the game, and we wanted the game to play everywhere.”

To achieve that goal of hour-long session times there was a lot of tweaking and iteration to be done in order to overcome the many aspects of the game that made players uncomfortable. Pixel aliasing, turning with analogue sticks, parabolic jumping, swimming and even claustrophobia could all converge on a player to make them feel nauseous in a matter of minutes, let alone hours. 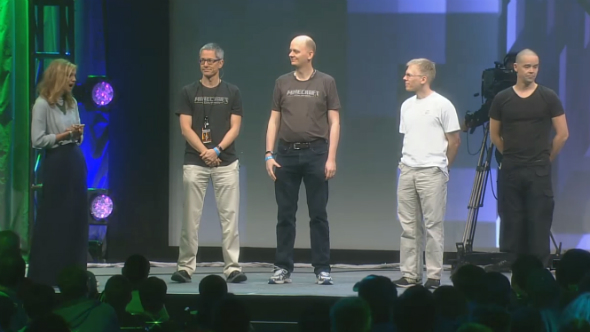 Living Room was the initial solution to extended play sessions, Saxs explained at the convention’s ‘Minecraft in VR’ panel. “VR is very intense, you actually get really physically tired. We needed to give people a break, but we figured out that if you tell people to take off the headset they just don’t do it because they’re having fun. So we created the Living Room.” The feature allows players to change their view to that of a gamer playing Minecraft in their own blocky lounge, sitting comfortably on sofa and watching the action through a TV. “Immediately you settle down, breathe and relax, and when you’re ready to go back into full VR you just press a button and it zooms back into the immersive world,” adds Saxs.

The team also opted for a staggered viewpoint turning mechanic that stutters the frame rate when the player turns left or right, which many players initially assumed was a bug. “Console-style stick jockeying is about the worst thing you can do for comfort in a VR game,” says Oculus chief technology officer John Carmack “I think there’s still the option for a hardcore mode but you should never ever do that, you should always use the virtual reality settings, or at the very least the stutter turn.” Granted, the turning isn’t pretty, but this is Minecraft, a game where functionality reigns supreme.

Months were dedicated to fixing anti-aliasing and ensuring the game runs and renders as smoothly as possible, a change that’s benefitted every version of Minecraft. Jumping has been overhauled, removing the parabolic arc when jumping and moving sideways at the same time. In fact, because navigating Minecraft’s blocky vistas requires so much jumping Mojang have made it so the player’s perspective only shows the upwards portion of each jump when scaling a series of blocks. Likewise, damage and dying have been reworked to provide a more gentle experience for the player. “When you get hit the world moves around you, so it feels like your head is being pushed back the whole time, which makes it way more intense than you’d want,” explains Microsoft Studio’s Soren Hannibal. “But that’s not the worst part, when you die and the screen goes sideways a lot of people started actually leaning over and losing their balance.” 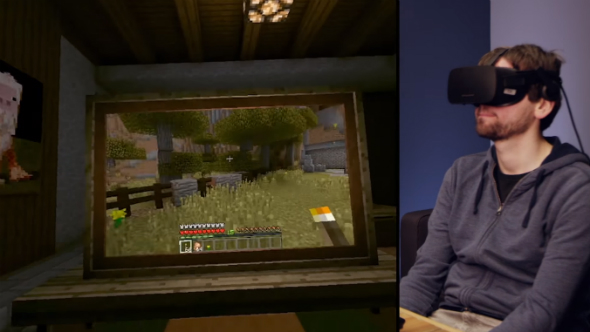 Essentially all the cinematic elements have been stripped bare to make the experience as tolerable as possible, and from what I played of the VR port, it’s a worthwhile change. Switching between the various options the developers have set up for VR and non-VR play reveals what a cumbersome beast the game would be without the hefty changes, and after just a few minutes the more noticeable tweaks went from creating a jarring experience to a seamless one. Giving players the option of playing Minecraft VR without the bespoke settings is Mojang’s way of justifying what could be seen as a hefty series of compromises.

But those changes are worth it, insists Saxs: “I remember the first time I went into a Hypixel server and played with other players who weren’t in VR – you get this feeling that if there ever was a metaverse then this is it. I’m standing on a square with about 500 people running around me: they don’t know that it’s me there. It’s like The Matrix, everything’s happening around me and nobody knows that it’s me standing there. It’s like a feeling I’ve never had when I’m playing a game, you’re transported into this busy square, like Fifth Element, and you’re going: ‘I can’t believe this is here’. I think the goal of giving people that experience is a worthwhile goal to fight for.”

With Gear VR implementation for Minecraft launching in April of this year and Oculus Rift support arriving in August, virtual reality hasn’t had long to make its mark in the Minecraft community, but Saxs says the reception has been great nonetheless. “We’ve done really well, like comparatively, because VR is a small platform. From a player perspective, the people that love the game have been extremely positive about VR.” 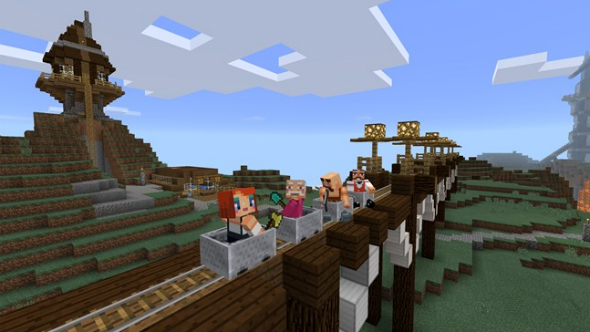 There are still nausea-inducing bugs to be squashed, and Saxs insists that getting rid of these remains the team’s core focus at this point as they strive to deliver comfort above all else. But the sole aim of two years spent polishing wasn’t just to provide a comfortable experience: Mojang are still looking to develop the core of their VR experience as the technology improves, starting with support for Oculus Touch controllers on October 18.

A brief demo shown during a Minecon panel show offered a glimpse at how Mojang plan to implement the new controllers. The demonstration showed a player tilting and swinging a sword with precision before switching to a bow that could be fired in one hand, while aiming independently of where the player was looking. But Saxs was keen to point out that motion controllers aren’t all about simulating exact actions: “I think we quickly figured out that if you’re mining manually you’d get very tired. Specific actions like this shouldn’t be needed, but we accept that some motion or even reaching out has a tremendous amount of immersion associated with it. So we’re trying to find a balance – so you can play for hours but you still get the immersion that moving a hand around provides.”

The Oculus Rift still has one major setback according to Saxs – cables – and there’s little chance of them overcoming that issue in the near-future. “From a generic standpoint they’re transporting a 4K picture with zero delay – for anyone who’s worked on compression algorithms, that’s not trivial. The broadcast delay on Twitch for example is fifteen seconds for a reason, because they need to get a smooth experience and they’re streaming a lot of it. If I told you that you had 10 milliseconds to get the picture from your PC wirelessly to your headset, that is still a very long way off. So that’s why getting the computer close to the display obviously matters,” explains Saxs, “we have benchmarks internally, like for example: what comfort really means or does comfort matter? The signal path from the traditional input to rendering is less than 15 milliseconds, that’s just a base requirement, but it means your whole engine now is architectured for that.” 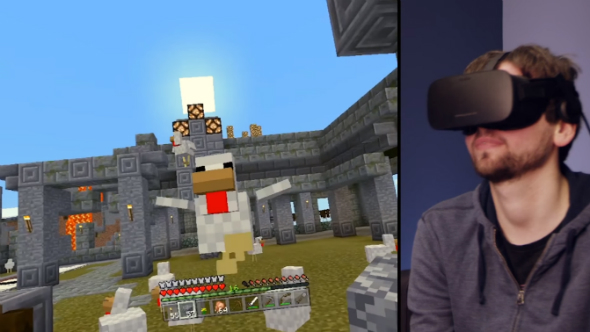 Both Saxs and Carmack said that they preferred to use the Gear VR version because they could have total freedom of movement, especially when using a swivel chair. “I was talking to the VR crew who are demoing it on the showfloor before I came over here, I asked about how the demos are going and a lot of the reactions were like ‘I don’t have the PC for it, I don’t have the room for it, I don’t have money’. These are things that we can’t overcome. What we can do is provide a game for down the line. When you get your Rift or your whatever, we’re going to have the game that has been formed over years just for that. But we want to get out early and just get feedback and keep going on it,” says Saxs.

In its current state, Minecraft’s Windows 10 version functions perfectly in VR, doing a surprisingly efficient job of making such a cartoonish world immersive and real. Caves feel scary and claustrophobic, combat is suitably stressful and one can imagine that simply exploring the multitude of grandiose builds the Minecraft community continues to churn out will be its best feature. Mojang are placing VR at the core of their update cycles, but in what form VR will find its feet remains unclear. That saddles Mojang with the unenviable task of trying to prepare for every eventuality.