Phew, what a week. The early rumbles over Mojang restricting how server owners can make money have turned into a bit of an earthquake. But now there’s some clarity over exactly what you are allowed to do and what you’re not.

The rest of the community, however, has been just getting on with being its usual amazing self. This week, we’ve got a single-player world powered by flesh, a great tutorial on A-frames, some D-Day inspired terrain and an island with a secret. Shall we begin? 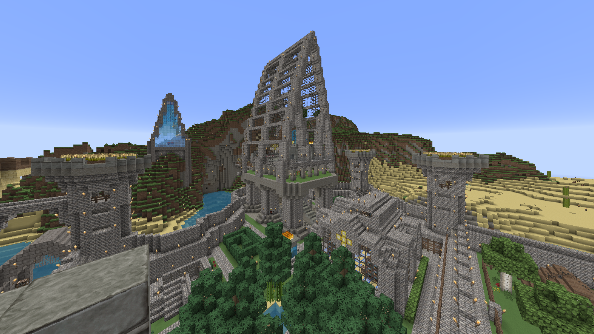 It’s a completely normal thing for companies to stop other people making money off something they’ve created. Until this week, the only exception to that rule in Minecraft was videos, but now Mojang has opened up a little more – allowing people to make money off servers.

In a post on the official Mojang blog, Owen has explained exactly what circumstances allow you to make money from Minecraft servers. In short, it’s totally cool for you to charge for access or for in-game items, as well as show advertising and accept donations, but you can’t create two tiers of players or sell anything that gives one player an advantage over another. “We hate the idea of server hosts restricting Minecraft’s features to players who have already bought our game! It seems really mean,” says Owen.

Meanwhile, there’s no snapshot this week but Jeb’s been hard at work on his underwater biomes. He’s published an image of the texture for the sea lantern block, as well as teasing some details about water dungeons – which sounds very exciting. Not quite as exciting, however, as the changes planned for sponge blocks. I’m very much looking forward to seeing what the community does with those.

Speaking of the community, its outpouring of creativity shows no signs of stopping. I really enjoyed this tutorial on how to use A-frames in your construction to create tall, imposing buildings. It’s a great way to put together Viking-like structures, but it can also be used for modernist greenhouses as /u/patbarnslow demonstrates amply. You can see some of the principles in action here, too. Really nice work.

Meanwhile /u/sparks_00 has built a power plant for his singleplayer world that runs on human flesh. Creepy. “I wanted a challenge,” he says. “Every redstone device is now hooked up to my rotten-flesh burning power plant. If I run out of flesh, everything stops working.” It’s entirely mod-free and everything. Impressive.

If you’re interested in some new terrain to play on, this landscape inspired by WW2 Normandy, released to commemorate D-Day, is beautiful. I also loved this cute little island with a hidden secret and this modernist mansion. Oh, and to cap things off for this week, here’s how you use a compass effectively in the nether.

That’s it for today. If you’ve seen anything in the Minecraft community that you think I should be highlighting, tell me about it by dropping me an email. I’ll be back with another roundup this time next week.