The first new hostile mob in a long time has been added to Minecraft in this week’s snapshot, as well as some new blocks that liven up the dead oceans and a massive stack of bugfixes and engine rewrites.

Meanwhile, the community has been its usual active self. We’ve got a whole range of different house designs for you to take a look at, as well as a semi-automatic TNT cannon and a beautiful custom map called The Shores of Albion. Shall we begin?

Before we get to this week’s snapshot it’s probably worth mentioning that the debate over server monetisation is still rolling on. Mojang’s been listening, and met last weekend to discuss the most common questions the team was getting. The results were published in a follow-up Q&A on Monday. There are plenty of details for those interested in exactly what can and can’t be sold, as well as how to deal with people who’ve already paid for gameplay features. Turns out, though, that the vast majority of Minecrafters are perfectly happy with what Mojang is doing. 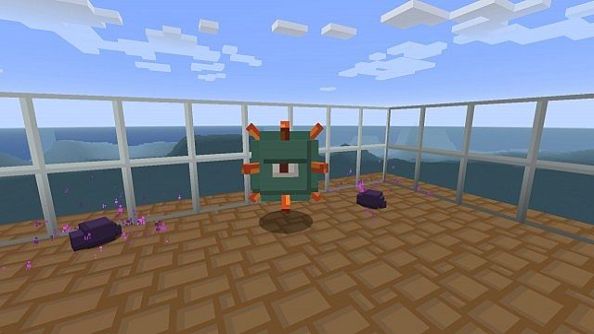 But far more interesting is this week’s snapshot. 14w25b adds a new hostile mob – the Guardian, which looks a bit like a big angry pufferfish and can zap the player with lasers. It only spawns underwater, close to another new feature called ocean monuments. Monuments are large underwater structures built out of a new colour-changing material called prismarine (which is great for building bathrooms and swimming pools) and lit by a new light source called sea lanterns.

The Guardian’s older brother is called the Elder Guardian, which is tougher and more dangerous (it can shoot you even if you’re in a boat) but only spawns three times in each monument. Oh, and there are sponges in there too, which can be collected and dried out to suck up water. To have a play with all of that, the stack of bug fixes, and the rewrite of the engine that’s been implemented, follow the instructions on the official Mojang blog.

Phew! All that doesn’t leave much room to tell you about what the community’s been building this week, but I’ll squeeze a few more bits in anyway. Last week I talked a lot about A-frames, and now someone has built a series of houses using M, I, N, E, C, R, A, F and T-frames. People are also still exploring what can be done with pistons and slime blocks, yielding this neat semi-automatic TNT cannon. I also loved this modernist desert house, and a custom map called The Shores of Albion.

But the best thing I saw this week was this recreation of excellent mobile game Plague Inc within Minecraft. It casts the player as a virus, which can then modify itself to infect different parts of the world. The goal? Complete extermination of the human race. Which is about as noble as it gets, I think.

That’s probably a good place to end things for today. If you’ve seen anything in the Minecraft community that you think I should be highlighting, tell me about it by dropping me an email. I’ll be back with another roundup this time next week.