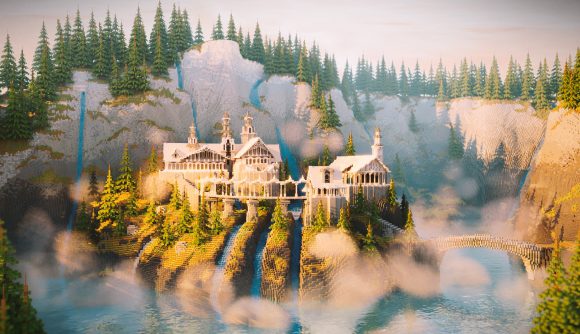 It’s Wednesday, and while that normally means we’d have another Minecraft snapshot to take a look at, this week’s beta preview has been delayed – so what better time to dig into the world of Minecraft creations? Today we’ve got a particularly impressive take on Rivendell as it appears in Peter Jackson’s Lord of the Rings films.

Creator 1nsinuating says on Reddit that the build took around three to four weeks to complete, using a combination of WorldEdit, VoxelSniper, and old-fashioned construction by hand for the structure itself. Look closely and you’ll see a small number of trees repeated throughout the environment, but that doesn’t make the effort any less impressive.

Other than the tools, it’s all vanilla Minecraft – the visual effects you see above are simply for the photo, rendered in Blender and Photoshop. 1sinuating is a member of Sapphire Studios, a build group that does commissions and contributes DLC to the official Minecraft marketplace.

For more of the best Minecraft builds, you can follow that link.

And for more sandbox games to dig into, you know where to click.