Nvidia is aiming for 1080p/60fps in Minecraft RTX with an RTX 2060, says a spokesperson for the company. Minecraft is due an RTX update next year, at which point we’ll see a plethora of ray-traced effects switched on in-game including lighting, reflections, shadows, and refractions. But neither Mojang or Nvidia has told us just how much silicon firepower we’ll need for this task – until now.

We’ve been testing out Minecraft RTX ahead of its wider public launch in 2020, and during our play through we were told that the graphics card company, working with Microsoft-owned Mojang to implement RTX and DXR in-game, is “aiming for” 60fps on the $350 RTX 20-series graphics card. As the sole proprietor of ray tracing acceleration in the gaming space today, Nvidia works closely with game developers to implement its technology – including reducing the performance costs.

The RTX 2060 is the cheapest ray tracing graphics card at $350. A quick peek behind the curtains revealed my buttery smooth play through was courtesy of an RTX 2080 Ti, a $1,200 GPU and the best graphics card in terms of raw performance going. But since that’s both a ludicrous GPU and a pre-production release of the game, we’ve not much to go on performance-wise just yet.

What’s not yet clear, however, is whether we can expect 60fps minimum or average, and what sort of ray tracing fidelity we can expect for that pace.

Minecraft RTX was announced earlier this year, bringing ray-traced reflections, shadows, lighting, and refraction to one of the most popular games in the world. 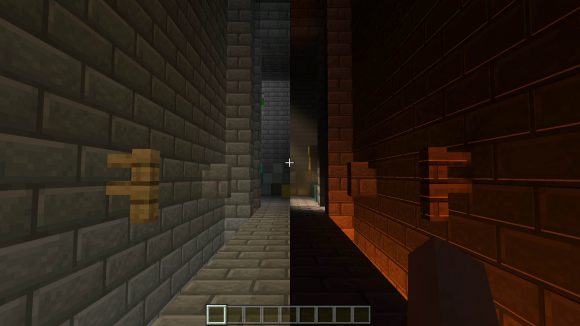 The inclusion of real-time ray tracing has a tremendous impact on the style and realism of Minecraft, and brings new depth to an otherwise simplistic and conspicuous cuboid world. It’s certainly a showpiece for what ray tracing can offer, but we’ll have to wait a little longer to see our own creations in full ray-traced glory.

Can you run Minecraft? Use PCGameBenchmark to check the Minecraft system requirements 2021.