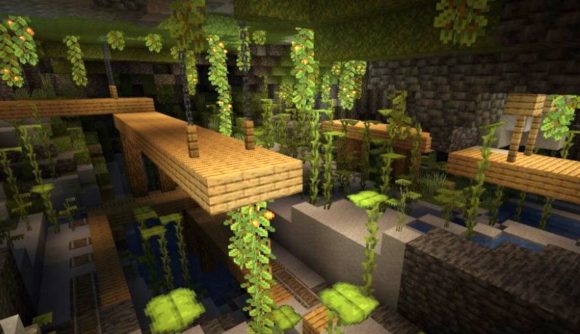 The Minecraft snapshots are coming fast and furious now as we move ever closer to the launch of the Caves and Cliffs update. Snapshot 21w10a is now live, and it introduces the lush caves biome, an overgrown underground area you’ll be able to explore. There are some technical changes to the game’s graphic engine, and that should mean better support for vanilla Minecraft shaders.

The new lush caves biome features mossy ceilings and floors, spore blossoms scattered around, and clay pools with dripleaf plants. Once the biomes are properly generating in normal worlds – this snapshot only includes them for single-biome worlds – you’ll find these caves underneath azalea trees on the surface.

This snapshot also changes Minecraft’s rendering to OpenGL 3.2. Broadly, that shouldn’t mean much for normal users, but there’s also been a change to shaders. “Shaders are now included for all supported render states,” the devs say in the announcement. “Any shader except for the blit shader can also be replaced in resource packs. For now replacing these shaders is not officially supported and the way it works may change in the future.”

Even with the caveats in mind, one dev has already provided an example of what you can do with resource packs in the new snapshot.

The Minecraft 1.17 release date is set to land this summer. One Minecraft player recently released a fictional US city three years in the making, so the block-builder’s world is continuing to spin in its usual fashion.