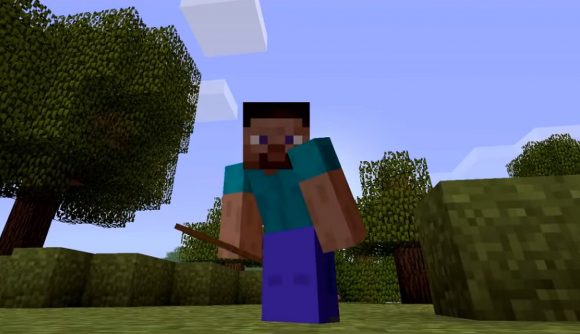 April 10, 2019 Taio Cruz’s team has been in touch to tell us that *actually* Dynamite was split into two videos, which have more views than the Minecraft parody when combined.

You remember Taio Cruz’s club banger ‘Dynamite’. Contemporaneous with Ke$ha’s ‘TiK ToK’ [sic], Katy Perry’s ‘California Gurls’ [sic], and Akon’s Sexy Chick (sick), it was a typical carefree earworm that signified nothing, but successfully distracted week-trippers to Magaluf in the summer of 2010. And in a sign of the changing times, the view count on the UK version of its garment-phobic YouTube video has been surpassed by a Minecraft parody entitled ‘TNT’.

As spotted by newbie1canoebee on Reddit, TNT has almost 103 million views at time of writing, having left Dynamite’s UK version languishing on about 86 million. An earlier version of this story implied this was the only version of said video – we were not aware that Dynamite has a second, practically identical, international version. Combined, their views exceed 262 million, which is “considerably more than double the TNT parody”, as, helpfully, Taio Cruz’s brand team pointed out to us.

As far as we can tell, TNT is about blowing things up so as to mine resources with which to build an ambitious city. On this musical journey the building part gets forgotten as creator CaptainSparklez is consumed by bloodlust. First he gets distracted by killing pigs, then the Creeper (“teabag his ghost and now his sulfur’s mine, singing aaay-oh, MLG pro”), and then by blowing up “every mountain, every valley” and “everything you’ve ever known.” It’s a relentlessly upbeat slide into insanity.

As good a dance tune as Dynamite is, you wouldn’t argue that it’s lyrically rich. Taio Cruz takes four minutes and sixteen seconds to say exactly nothing apart from where he puts his hands and how happy he is to be “wearing all [his] favourite brands, brands, brands”, so for a YouTube audience, I can kinda see why TNT eventually overtook  one version of his video.

Here’s Dynamite, if you fancy a dose of nostalgia and mindless optimism – and hey, you’ll get no judgement from me. Summer 2010 was awesome.

Read more: check out some of the best Minecraft adventure maps

In recent Minecraft news, there’s a mod that puts ray tracing into the game and it looks incredible, while Microsoft appears to have removed references to the game’s original creator, Markus ‘Notch’ Persson, in its latest update (though Notch still appears in the credits, which is probably the most important place).