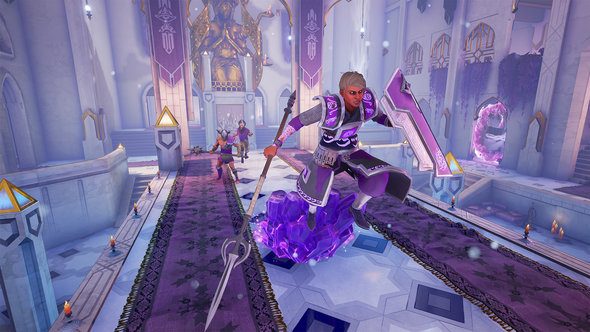 Mirage: Arcane Warfare is out today. The Arabianesque multiplayer FPS is the second game from Torn Banner Studios, who you might know from 2012’s celebration of knighted brutality, Chivalry: Medieval Warfare. This time around players are given the same array of blades and bows, with fantastical magic and flying carpets thrown into the mix for good measure.

Get up to scratch before you play with everything we know about Mirage: Arcane Warfare.

The focus in Mirage is very much on timing and skill. Much like Chivalry, players will often find themselves in 1v1 duels or holding off a number of enemies with well-timed blocks, counters and dodges. The addition of movesets, similar to those found in other hero-based first-person shooters like Overwatch and Team Fortress 2, adds a more RPG-like set of mechanics to the foundations built by the studio over the last five years. There’s also a fairly beefy selection of voice commands, enabling players to inject a sense of personality into their chosen avatars while they hack off limbs and blow off heads with magic.

Mirage also has a backstory involving magical rifts, corruption and a civil war. You can check out the animated trailer for the lore side of things in the video above. This informs a set of environments based on Persian and Arabian architecture. Palaces, bazaars and deserts are all present, allowing players to cast and smash their way through six game modes, set across 27 maps.

Mirage’s six different classes appear to provide a decent amount of variety, especially given the customizable nature of their loadouts and it seems reasonable to expect a fairly fluid meta to emerge in the coming weeks, as players figure out the best combinations of classes and spells.