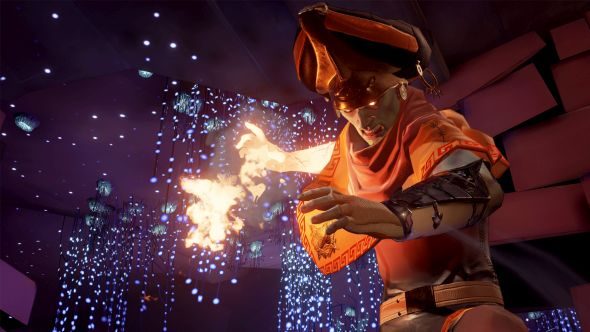 Update, September 6: Mirage: Arcane Warfare has generated a ton of interest since going free for the day, with over 40,000 players picking up a copy and hopping in.

Mirage: Arcane Warfare started its 24 hours of being free just a short time ago, and it already appears to be a smashing success. Yesterday, the game was averaging about four players at a time, and it’s peaked today at over 40,000. We’d call that a pretty big success, but it remains to be seen how many of those people will stick with it over time.

Not your bag? Have a browse of upcoming PC games.

Note that this isn’t just a 24-hour trial period, and anyone who picked up the game today will continue to have it in their Steam library. To that end, why don’t you go ahead and add it to yours? The game’s price will permanently drop to $9.99 / €9.99 / £7.49 after the free period is up.

The game had been struggling since launch, averaging no more than 80 players since its May release. The previous player peak hadn’t even reached 1,000. Given the fond regard many have for Chivalry: Medieval Warfare, it was surprising to see Mirage struggle so spectacularly, but there should be renewed hope given these numbers.

Original Story, September 6:Mirage: Arcane Warfare got lost in the hero shooter glut when it came out in May. Made by a small team with lower ambitions, it didn’t stand much of a chance when Lawbreakers and the like failed to break through. Itsall-time peakplayers is sub-1000 and those aren’t numbers that get better by themselves.

As such, developers Torn Banner are making the game completely free to anyone who wants it for the next 24 hours, and after that they’ll be permanently reducing its asking price.

These moves were announced in a Steam announcement today. In it, Torn Banner say that “Mirage launch sales were poor. That sucked, and we know it. Our company’s doing fine, and we’ll be able to continue to make awesome games in the future.”

Why the decision to make it more accessible? They want people who did cash in to actually be able to find a game – at time of writing, the concurrent player count is, er, three. “We just want people to play the game we spent years making,” the developers say. Indeed, they’ve also been updating it since its launch.

Despite all the bad omens, they still believe it’s a good game and can find an audience, hence the drastic move. They encourage people to try out the free version when it goes live at 10:00 PT / 13:00 ET / 18:00 BST, or check its review scores on Metacritic where it sits on a respectable 74.