Given the crossover between videogamers and fantasy fans, there’s a good chance we’ve got some Mistborn readers on the site. Bad news, I’m afraid – Mistborn: Birthright has been cancelled. But there’s a silver lining if you’re also a fan of Final Fantasy Tactics, as the Mistborn devs have taken over development on Unsung Story, a spiritual successor.

Scratch your questing itch with some of the best RPGs on PC.

Author Brandon Sanderson had penned an original story for the game, which was to be a prequel to the books. By 2012, Little Orbit had actually finished a vertical slice and shown it at E3, but the game changed as the partners involved in its development and funding moved around.

It grew in scope. By 2014, a potential deal with High Voltage Studios had inspired “a spectacular open-world Mistborn game,” with elements of Assassin’s Creed and Dishonored, combined with physics-based gameplay driven by Mistborn’s Allomancy magic. That sounds fantastic – imagine ironpushing off rivets in the ground to fly around an open world.

Sadly, two of Little Orbit’s retail distributors “went out of business, taking large chunks of our revenue with them,” Scott says. “Funding for future titles was immediately canceled, and it nearly bankrupted the company. We barely survived.”

Indeed it’s hard to see how a studio could survive without funding, but Kickstarter is an avenue that’s worked before. That’s where Unsung Story comes in. 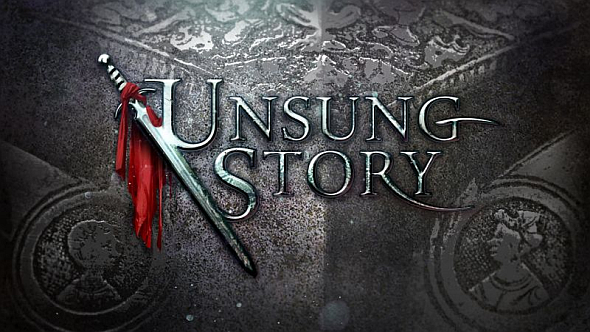 Unsung Story is a tactical RPG, supposedly envisaged as a spiritual successor to the classic Final Fantasy Tactics by its creator and genre legend, Yasumi Matsuno. Accordingly, it secured $660,000 in funding on Kickstarter, but to say it’s been going badly would be an understatement – last we heard, it’s not been going at all.

Kotaku have a handy rundown of the whole sorry affair, but to summarise: devs Playdek not only delayed the game indefinitely from a July 2015 release, but randomly switched its focus halfway through development to emphasise PvP combat, rather than the story-driven tactical RPG everyone had signed on for. The words ‘PvP’ and ‘multiplayer’ weren’t even in the original Kickstarter pitch.

About a week after the Mistborn news, Unsung Story’s Kickstarter finally received an update… penned by Matthew Scott. It seems Little Orbit are taking over its development – after all, that’s $660,000 sitting around doing nothing.

“First the bad news… Little Orbit is starting from scratch. We have spent hours going through the Kickstarter comments and researching all of the project materials, and I feel the backers have made one thing clear – we need to focus on the original single-player game and Matsuno’s design that was promoted during the campaign. And that is exactly what we are going to do.”

The good news is that Little Orbit will honour the original Kickstarter backer rewards at no extra cost. Best of luck to them – small and relatively unproven though they are – as they try to sort Unsung Story out.

As for the Mistborn game, Scott’s done the decent thing and let the rights go. He says they’re “back in Brandon’s hands, so he’ll be able to pursue anyone he wants to.” Here’s hoping that awesome vision for a Mistborn game comes to pass, and we get two great games out of all this instead of none.