During the post-WW2 period, developments in weapons technology – specifically anti-tank ordnance – challenged the dominance of the tank on the battlefield. It’s a problem that vexes even modern militaries (and there hasn’t yet been a big enough war to sort it out), but after playing Cold War tactics game Möbius Front ‘83, you can tell the creators are quite taken with this particular doctrinal puzzle.

Advancing through rural America is less about large, rolling formations of armour, and more about the tactical application of infantry and AT weaponry – about shepherding your heavy-hitting Patton MBTs into position so that they can deal out their righteous fury. Or, more likely, get caught out by an enemy ATV’s movement range and instantly deaded. Möbius Front’s AI is tenacious, but it can also be frustrating.

This turn-based tactics game is inspired by official US Army training manuals from the period (which have been made available to read in-game), and is the latest creation from the mind of Zach Barth of Zachtronics fame. It definitely stands as the most strategic game the studio has released to date, but I’m not sure it’s capable of scratching the strategy itch to the full extent that fans of this genre require. It’s more than a simple tactical puzzle, but falls short of the complexity of true strategy thoroughbreds. This isn’t Advance Wars, sadly, and it definitely isn’t a Cold War Panzer Corps.

The premise is fun and funky, if thinly spread across the game like the last box of army-issue rations. Möbius is set during the Reagan years, and while America is distracted by the growing threat of Soviet Russia invading Europe, a new invader shows up right in its heartland. Another America from an alternate dimension has, for reasons, decided to hop over to our universe and attack our US of A. I won’t say any more, although it’s worth noting that the story elements are kept to short pre-and-post battle vignettes that leave the rest of the game feeling a tad dry. The vignettes themselves also aren’t anything to write home about, though they don’t outstay their welcome. 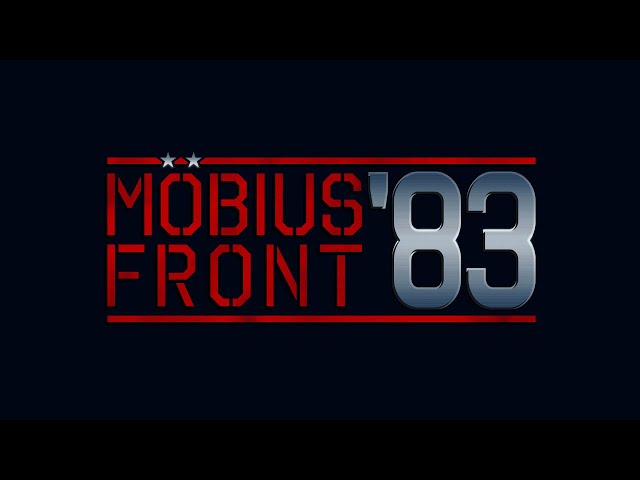 Each level in the campaign features a compact tactical space divided into hexes, and plays out with a cadence that will soon become, or may already be, familiar to you. It’s a turn-based, IGOUGO duel between yourself and the opposing AI in which the enemy often goes first. Sometimes you start a level with units pre-deployed, but otherwise each side will have a number of deployment points spread across three phases (which usually tick over every five turns or so). I haven’t yet encountered a turn limit on individual levels.

It’s not the Advance Wars homage its visuals may suggest, nor a pixelated tactical wargame like Panzer Corps

Units can move or attack on their turn, and more advanced units have other abilities that offer more utility. I’ve only encountered two types of objective, which can make levels feel a tad repetitive – especially early on.

You’re drip-fed plenty of unit variety, though, which makes experimenting with the tactical problem of each level a bit more rewarding. The unit mix is always different, but it can be satisfying to feel out the best strategies with, say, air cavalry (infantry transported by helicopter), or a fully mechanised column of tanks and APCs. Other levels will leave you with only trucks and jeeps, forcing you to set ambushes with infantry units that can (partially) hide in forests. 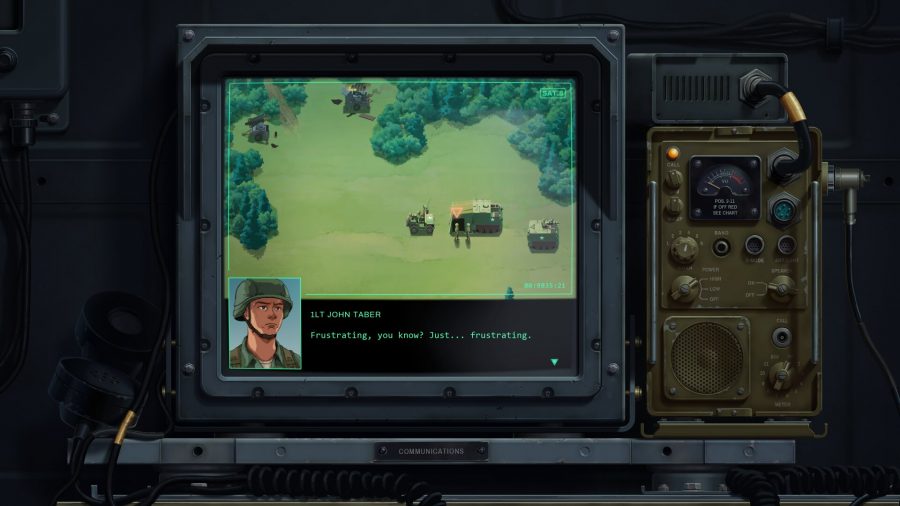 The AI on normal difficulty is tricky, as mentioned above, but at times this is because the game doesn’t explain its own rules of engagement particularly well as opposed to any well-crafted sense of challenge. Line of sight is quite generous (for both sides), some units can fire after they move (and mechanised units can be quite zippy), and many of those same units have powerful AT attacks that can still take out a key unit even with reduced damage from moving. This not only makes setting up defensive lines difficult, but even advancing too far too quickly can see you get bloodied and trigger a failure cascade.

Möbius only has a single campaign mode, in which each level can be done on standard or ‘relaxed’ difficulty, but there are also two mini-games. Zachtronic titles always feature a variant of Solitaire and this is no different, but there’s also a puzzle game based on concepts lifted from the field of Signals Engineering, which is actually quite neat.

I suspect Möbius Front ‘83 may end up getting trapped between zones of expectation. It’s not quite the Advance Wars homage the visuals may suggest, and it’s definitely not a pixelated tactical wargame to the same degree as Panzer Corps. It’s also not your typical Zachtronics puzzle experience either, although that legacy can be felt. At its core this is a competent, but slightly dry, tactical strategy game themed around Cold War military operations and hardware. It doesn’t deliberately over-promise, but it’s important to manage your expectations before firing it up. Zachtronics doesn’t make wargames, and after playing this you’ll find that it still doesn’t – but this comes awfully close.

Competent and challenging but not especially deep, this Cold War tactical romp also tends to get a bit dry and repetitive at times.