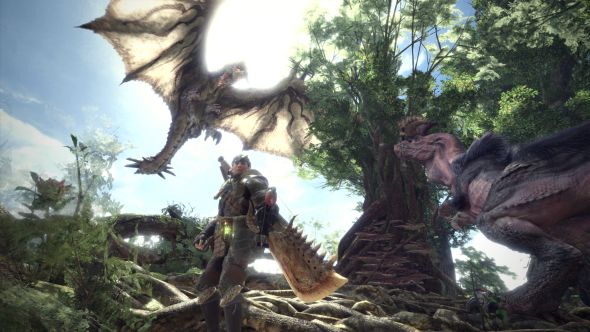 What flavour do you like your gameplay video? Dodgy off-screen hidden cam recording or official livestream? Monster Hunter: World has both on offer today, as a livestream begins in just a few minutes (watch it above), but a leak of the behind-closed-doors E3 presentation has also been uploaded online.

Here’s our soon-to-be-updated list of all the upcoming PC games.

There’s no guarantee that the livestream will contain gameplay but, well, it would make sense, eh? Chances are it will simply be the E3 presentation, spruced up a bit for us, the unwashed internet masses. It’s also going to be in Japanese, so don’t expect a tonne of clarity if you’re language-challenged. A Google translate of the description promises “first real machine play” so we’re up to about 99% probability.

For a quick fix, or if you just prefer terrible lighting conditions, there’s thisrecording from E3. It’s got some talk-over, explaining the series of small encounters leading up to the big boss at the end. It’s as CAMRIP as they come but if you’re desperate for more Monster Hunter, it’s what you’ve got.

We’ll update this post if anything significant is revealed during the livestream. We’re still expecting Monster Hunter: World some time in 2018, after the console versions launch in the first quarter.