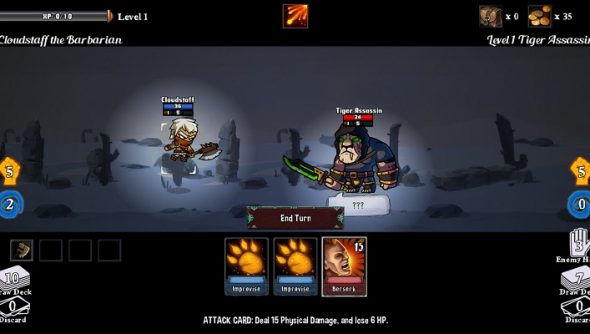 I know the phrase ‘randomly generated deck building roguelike’ sounds like a marketing team is playing PC game Mad Libs but hold on, as Monster Slayers sounds greater than the sum of its parts. Based on the hugely successful Flash game, Monster Slayers combines dungeon crawling with collectible card game mechanics, as adventurers gather attack cards and gear to build up a powerful party and deck.

For more top draw RPGs, check out our list of some of the PC’s best RPGs.

By travelling through different areas, your party of monster hunters will gain cards which correspond to specific attacks and abilities that they can use in battle. Split between Attack, Support and Magic cards, players can craft card combinations and decks which suit their party and play style. So, if you have a party containing a wizard and a rogue, you’ll probably end up your rogue having a fair few Attack cards which deal with fast attacking strikes, with the wizard will have Support cards to help buff stats and keep you attacking.

Similar to something like Hearthstone, you can only play cards if you have enough mana or AP. In Monster Slayers, Attack cards depend on AP, Magic on mana and Support cards may require a mix of both. So, creating a powerful deck requires balancing heavy damage card combos, with having enough AP or mana to actually play them.

Don’t be put off if you don’t have already have a mastery of card games, Monster Slayers breaks you in quite gently with its cutesy art-style before ramping up the intensity, once you have a basic grasp of the deck building system.

When you combine this with special loot you can equip to your party members, a meta-progression system where you gain persistent character upgrades along with all the usual rogue-like trappings, Monster Slayers looks like quite the time-sink. If you’re looking for a game to combine a love of crafting devastating combo decks, with ever-changing dungeon crawling, it may be just the thing for you.

Monster Slayers will available on Steam for PC on March 23, starting at $7.99.