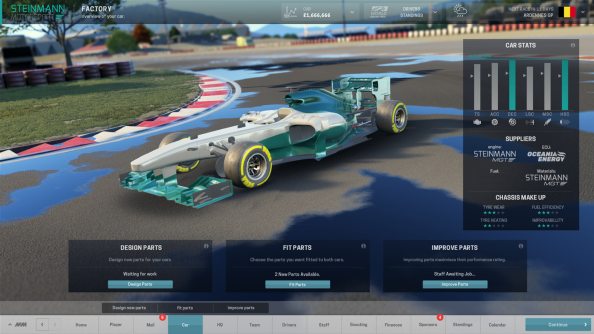 Every now and again a racing sim will indulge in the off-track business of running a motorsports empire, but Sega’s new series pulls you forcibly from the driver’s seat and asks you to devote yourself to building a team.

How many of the best racing games on PC have you mastered?

Hire drivers and mechanics, research new tech, pick race-day tactics and argue for rules changes that benefit you first and foremost. Forget the apex: this is fast cars as overarching sporting phenomenon.

The pre-season phase sees you design and build cars from the axis up to suit particular racing conditions, chasing the oh-so-PC-gaming high of perfect optimisation. You’ll watch the results play out in a 3D engine that handles practice, qualification and full length races. And there’ll still be “split second” decisions to make, we’re told, even from the sidelines.

Motorsport Manager’s had an odd birth, launching as a mobile game in 2014. It’s been rebuilt for the PC by a team of 14.

“As motorsport fans, we’ve been waiting to play a game like this for a long time. That was how the original Motorsport Manager for mobile devices came about,” says Playsport Games founder Christian West. “We wanted to take that experience to the next level by building an all new version of Motorsport Manager for PC with massively enhanced gameplay and unparalleled depth.”