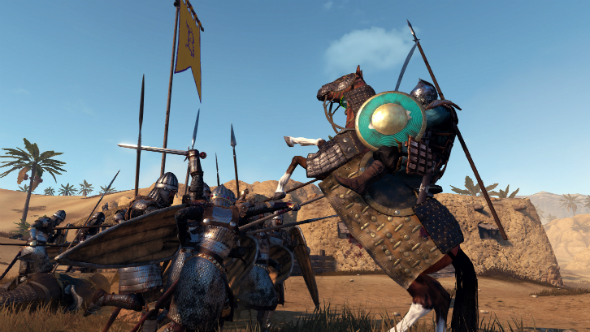 All my men are dead and there are now three enemy horsemen pursuing me. As a lone archer who stands no chance of surviving, I do what anyone would in such a dire situation: I keep running and don’t look back. Eventually, once I’m absolutely convinced of my impending doom, I glance over my shoulder, only to discover two horses lying dead on the ground and another galloping away.

Want to know more about the game? Here’s everything we know about Mount & Blade II: Bannerlord.

One of my three pursuers is also dead – the other two are nowhere to be seen, but my senses tell me they’ve gone to join a nearby skirmish. I, meanwhile, seem to have slipped behind the enemy contingent entirely unnoticed. For the next two minutes I’m able to fire arrows into the stoic formation of knights and archers without consequence – I manage to rack up several kills before a roaming spearman runs me through. My solo killing spree has come to a gruesome end.

This is Mount & Blade II’s Captain mode, a 5v5 multiplayer game type where each player brings between ten and 20 AI troops with them into battle. For those familiar with the standalone expansion for the first game, Mount & Blade: With Fire & Sword, Captain is a more strategic version of Captain Team Deathmatch. It adds capture points that periodically move around the map in an effort to shift the emphasis to tactical play rather than medieval massacres. To that end, the results are mixed, but usually fun. 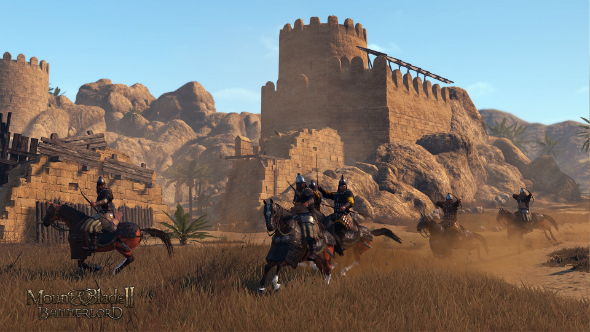 At the start of each match you pick the class of troops you want to control – there are two types of cavalry, two archer classes, and three infantry styles. You also select two of six perks for that class, which allows you to define your style of play a little easier with bonuses to traits like movement speed, accuracy, and armour. Team balance is important too, as each unit type can be easily countered by at least two others – cavalry-heavy teams will struggle to take down even a single band of spearmen, while archers stand little chance against a cavalry chance unless protected by some heavy infantry. It’s this dynamic that propels much of the action in Captain mode. Knowing where to position your troops, who to partner up with, and what enemies you’re best equipped to engage can be the difference between winning and losing.

In my second match, I select a light archer class. I rush out of the spawn, making full use of the Lightfoot perk, and quickly order my men to line up along a ridge overlooking a large hill that connects two capture points. After a minute of firing potshots at distant cavalry, I spot a mass of troops moving up from one objective. At the front is a solid shield wall while at the back is a group of light archers just like mine. Within a couple of minutes, the bulk of my men have been picked off while only a few of theirs lie dying in the sand behind them. They continue to move up the hill towards the ridge where my men are valiantly holding their ground. What they don’t see, and the reason I choose to stay put rather than flee, is the heavy cavalry unit descending on them from the crest of the hill. The scene is reminiscent of Gandalf’s arrival at the Battle of Helm’s Deep as the approaching horde spins around in dismay as they’re engulfed by a full-strength cavalry charge. With their attention split, their troops scattered, the enemy are easily picked off.

Mount & Blade II: Bannerlord excels at making complex troop arrangements and tactics easy to execute on the fly. Almost every basic order only requires a couple of function keys and positioning with your mouse. F1 opens your movement options, F2 lets you choose where your men are facing, F3 is dedicated to specific formations, and F4 and F5 are class-specific actions like telling your archers to fire at will or ordering your cavalry to dismount. A good memory will serve you well when it comes to specific, evergreen orders like circle and line formations, but a large and clear UI ensures your men are never left to their own devices for more than a few seconds. 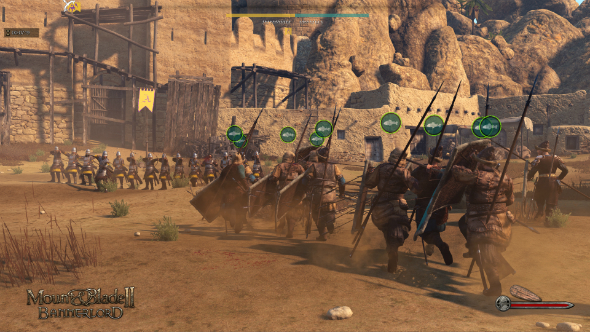 Combat is the highlight here, and it’s a marked improvement over the first game as far as feedback is concerned. Landing a hit on another player feels spectacular, heroic, and sickening all at once. Reaction animations are dramatic: manage to throw a javelin at an approaching enemy and they’ll double over as a huge splatter of blood decorates the desert sands. Even if it isn’t fatal, you certainly get the sense that you’ve inflicted a lot of hurt on your opponent. It’s also remarkably difficult to land a direct hit with some weapons, particularly when mounted. This only exaggerates the brutish glee you feel when you manage to time everything to perfection and plunge a spear right into an enemy’s horse, bringing the beast to its knees, and propelling the rider some distance. A quick turn and you can line up the finishing blow, just as your target is finding their feet.

The same goes for cavalry charges, which deal out huge amounts of damage and turn enemy groups into bowling pins. You really get the sense that you’re softening groups up, leaving them exposed as a friendly infantry faction move in to finish them off. There’s a small degree of awkwardness as some enemies stagger and buffet out of the way, where in reality they would be in for a good ol’ trampling. Regardless, Mount & Blade II: Bannerlord nails the sense of weight that any game with medieval weaponry needs to have in order to feel convincing.

Playing as heavy infantry delivers yet another distinct flavour of combat – you and your men are slow, but you’re also very difficult to take down. Defending an objective at the bottom of a hill, encompassed by a number of mud huts, I employ a simple circular formation and order my men to guard me. The enemy have two mounted contingents racing towards my position in a pincer movement – I’m absolutely ready to see my men torn asunder, popcorn at the ready. I write off any assistance from an approaching band of friendly archers, and sure enough, they’re too far away by the time the first stampede arrives, only just setting up when the second cavalry charge heaps yet more misery upon my heavies. Astoundingly, everyone in my troop is still alive. Meanwhile, a number of horses can be seen dashing towards the horizon without their riders. Bastard swords, it turns out, are great at dealing with mounted enemies, and even more effective against them once dismounted – I catch one of my troops winding up an overhead swing and wince as it comes down on the unfortunate soldier. 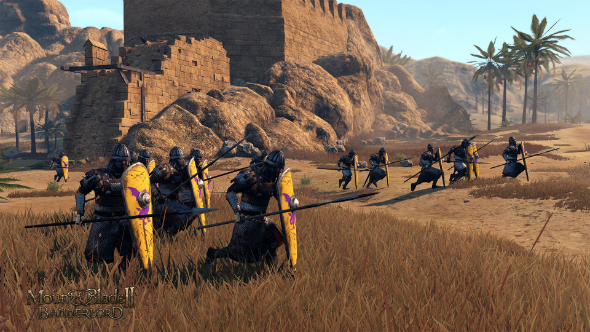 By the time both cavalry units come back for more it’s clear we have the advantage: as the enemy gets even more battered and broken up, my circle formation holds relatively strong. The nearby archers have played it smart, too, sticking to a nearby tree line so as deter any direct attacks. Alas, eventually – inevitably – my men start to die. I’m now left with three by my side. It doesn’t matter though, because we have the objective and an unscathed formation of archers ready to punish anyone that tries to recapture it. I am a cold leader, I know, but being all warm and fuzzy does not win wars.

Exactly how much difference holding the flag made to our victory is hard to say as, during my time with the Captain mode, matches were broadly decided when one team had run out of soldiers to use. The sole exception to this was the opening round, in which the enemy captured and held all objectives on the map, bringing the game to an abrupt end after a couple of minutes.

Even so, Mount & Blade II: Bannerlord feels like a much more polished game compared to its predecessor. Some work still needs to be done on hit detection, but aside from gripes like that, it’s the most convincing medieval combat game I’ve played. More time with it should reveal further nuances – the potential impact of its perk trees, for example, and how different armies fare against one another. But you can rest assured that TaleWorlds Entertainment are creating a convincing multiplayer experience, even if that’s not the feature most fans are dying to hear about right now.