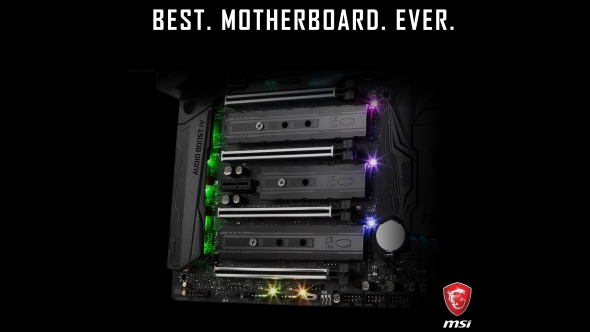 MSI have been teasing what looks like an X299 motherboard ahead of the Taiwanese techgasm that is Computex at the end of the month. We’re expecting a whole lot of Skylake-X/Kaby Lake-X motherboards on display at the show, hopefully along with some CPU details from Intel ahead of launch later on in June.

Until Intel get around to releasing their next-gen platform our picks for the best Intel motherboards for gaming are still these beauties.

Now the first thing you might notice are the number of M.2 SSD sockets this thing is sporting. I mean, damn, three just seems greedy. But then if you’re offering what looks like four full x16 PCIe 3.0 sockets for the multi-GPU faithful you’re not doing things by half… 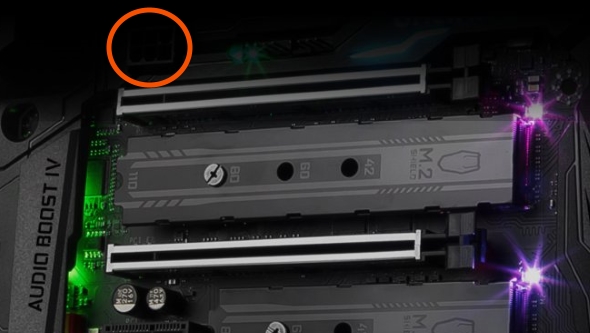 And, speaking of the multi-GPU shenanigans MSI are anticipating being carried out with this board, if you look closely you can see an extra 6-pin PCIe power connection by the top-most slot offering extra juice for a big graphics card array.

Oh, and there’s lots of RGB LEDs too. Of course.

MSI aren’t the only folk having X299 motherboard fun ahead of Computex because some early benchmarks have shown up from the SiSoft Sandra database showing the top-end Asus Prime X299 Deluxe. The benchmark numbers aren’t massively exciting (aren’t motherboard benchmark numbers ever thus?) but that can be easily explained by the fact that it’s running one of the bizarre Kaby Lake-X CPUs rather than one of the full-fat, mega-core Skylake-X processors. 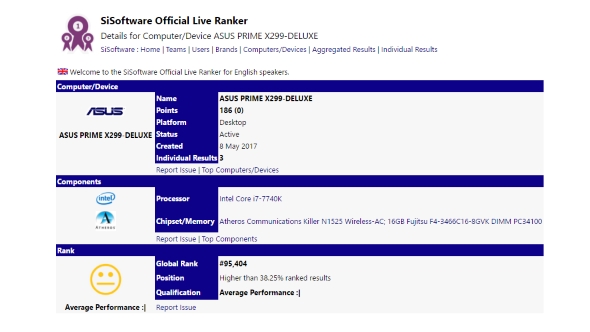 The Intel Core i7 7740K is like some weird hybrid chip that’s meant to sit between the Core i7 7700K and the bottom-end hexcore Skylake-X processor. The i7 7740K is a quad-core, eight-thread CPU with a 4.2GHz base clockspeed and a 4.5GHz Turbo.

Also part of the Kaby Lake-X lineup is a Core i5 7640K, the first i5 chip Intel have ever produced for the high-end desktop range of motherboards. Quite why it exists I really couldn’t tell you, unless it’s a way for users to get onboard with the X299 boards without necessarily having to spend big on a big CPU straight away. But that’s gotta be a pretty niche usage case. These chips can’t even take advantage of the quad-channel memory the X299 boards sport, limiting themselves to only using dual-channel DD4, restricting the available bandwidth.

If Kaby Lake-X is looking a bit weird, the Skylake-X range is far more regular fare. Intel’s top-end processor lineup will start at six cores, with eight, ten and potentially even twelve core CPUs mooted to fill it out.

So, when are we going to see the next-gen high-end desktop processors launch? Well, we’re expecting to hear more about them at Computex at the end of this month, but with a proper launch potentially happening a few weeks later. Did I mention Intel are sponsoring some PC gaming thing at E3? That’s a couple weeks after Computex, right?