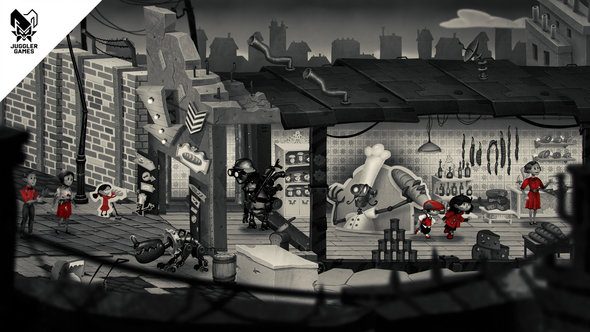 My Memory of Us is a game based on real events that took place in the Jewish ghettos of Poland during World War 2. However, the Nazis have been replaced with robots and there is a flying whale which pulls a train through the sky. There’s a sentence I never thought I’d end up typing. But as the game’s website points out, “sometimes it’s not about the history. It’s about the story.” Quite literally, in this regard.

Stay up to date on upcoming PC releases with our list of games on the horizon.

But focusing on the superficial elements of My memory of Us will definitely leave you missing the point. The robots, whales and evil king are all allegorical for a terror that was (and still is) all too real. This is a game about a boy and a girl finding friendship in the most miserable of places and given the original subject matter, it makes total sense that developers Juggler Games might want to utilize a fairy tale setting to get their point across. But for Juggler Games, it would seem it’s about more than just making a point. This game is a tribute to their ancestors who experienced these horrors first hand. In their own words, they explain “we wanted to tell their stories to the world, about their tough childhood experiences; about their nostalgia, their longing for real friendship, and about together opposing the great danger that is war.”

The game itself is set to be a story-driven adventure title, set in a kingdom presided over by an army of robots. Everything is fine until one day “the evil king simply changed all the rules. He segregated people – some were marked as better, others as worse. He created his own rules and harshly punished anyone who was brave enough to oppose him.” The game has you controlling both the young girl and the boy, solving a host of puzzles and utilizing a dialogue system built around the language of symbolic pictures.

My Memory of Us has no release date at the moment, but you can check out the game’s website for some truly gorgeous art and animation. Furthermore, the game will be playable at this year’s PAX East in Boston.