The Revolution Unlimited Pro Controller is ostensibly an official PS4 pad, but by virtue of pretty much every console being a PC these days – bar the post-ironic Megadrive/NES/SNES Mini hipster-bait – it’s potentially a great PC controller too. There hasn’t been a pad released that’s been able to knock the Xbox One Elite off the top spot as the best PC controller, but maybe, just maybe the Nacon Revolution Unlimited Pro will be the one to do it.

It’s going to have to go some because the weight and build quality of the Xbox One Elite is second to none, except maybe the Steam Controller. I can’t even type that with a straight face… sorry, sarcasm doesn’t really come out too well in the written word, does it? The Steam Controller is made of the cheapest trash plastic, feels unforgivably hollow, and for all its additional functionality is about as pleasing to use yourself as an iron maiden. And yes, I have reconfigured it extensively. Come at me, Valve nerds.

Anyways, the Xbox Elite is obviously what the Revolution Unlimited Pro has in its sights, sporting interchangeable analogue sticks and tops, as well as extra triggers on the underside too.

Because it’s a PS4-compatible controller though you also get a fully functional trackpad on the top, and the Revolution Unlimited Pro also has adjustable weights so you can tailor the heft of the pad to your own personal taste.

Perfect pads: These are the best PC controllers around today

The concealed compartments in each of the controller’s hand grips can house one of the six different weights supplied with the new Nacon pad. There are pairs of 10g, 14g, and 16g weights, and you could even offset the weights by mixing and matching them too. Y’know, should you have one hand that’s heavier than the other. Some people do.

Like the previous Revolution controllers it’s also got that natty red ring around the right hand thumb stick, because you can’t have a gaming peripheral in 2019 without having some LEDs on it. But unlike the older pads Nacon has opted for a standard USB-C connection for the wired cabling. You can also use a Bluetooth dongle, however, if you want to game with the Revolution Unlimited Pro wirelessly. 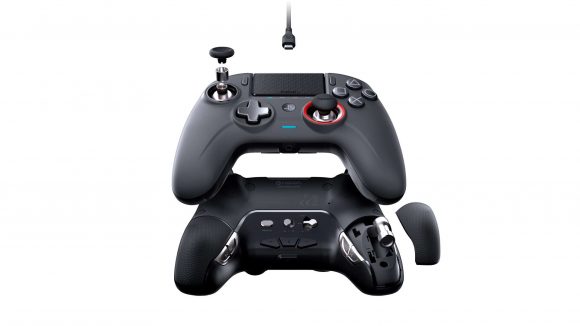 There will be some folk who don’t appreciate a PS4 pad having asymmetrical thumbsticks, but personally I much prefer having them configured this way. The standard Sony way of configuring them at the same height can lead to awkward moments where your thumbs touch mid-game, and no-one wants that.

I also quite like the look of the MASSIVE buttons too. Maybe it’s my advancing years, but I kind of appreciate that made-for-the-elderly aesthetic.

Without getting hands-on with the controller though it’s tough to say how solidly the Revolution Unlimited Pro is built, how accurate the thumbsticks are, or how effective the analogue triggers are. But given the £150 price tag you’d have to hope for the best. If it can combine the incredible thumbsticks of Sony’s own DualShock 4 controllers with the Xbox One Elite’s triggers and build quality then it’s going to be on to a winner.

The Nacon Revolution Unlimited Pro is going on sale in the next couple of months and we should hopefully have a review sample in the office around then too.