The cost of one gigabyte of NAND flash is expected to drop below 10 cents before the end of the year, according to new market research. The NAND flash industry is experiencing a period of rapid change, price correction, competition, and oversupply in 2019, which some may describe as the perfect storm. Lucky for us gamers, all this turbulence has led to dramatic price drops on some of the best SSDs for gaming.

The folks over at DRAMeXchange believe that SSD prices for OEMs are about to drop further than ever, largely due to oversupply conditions in the market and a price war between SSD suppliers as they attempt to shift 64- and 72-layer stock to make way for 96-layer NAND. Reportedly reaching peak rate back in 2017 – a dark time for PC gamers – 512GB and 1TB SSD contract prices will fall below $0.10 per GB by 2020.

Well over half of all notebooks were reportedly fitted with SSDs back in 2018, according to the report, and while this fast creep into dominance is expected to continue in 2019, 512GB drives are expected to take over as the de facto standard. So far 128GB has been the go-to drive of choice.

PCIe NVMe SSDs are also expected to take precedent, with the prices for these drives recently achieving parity with slower SATA interface-equipped alternatives.

DRAMeXchange (via Hexus) reports that this marks the sixth consecutive quarter of decline in average contract prices for NAND, with SATA SSDs falling some 15-26% and PCIe SSDs by 16-37% quarter over quarter.

QLC NAND is also reportedly having an impact on pricing in a roundabout way. While the drives aren’t all that much cheaper than TLC drives right now, the marginal price disparity between the two NAND technologies has put increased pressure suppliers to offer cheaper alternatives. 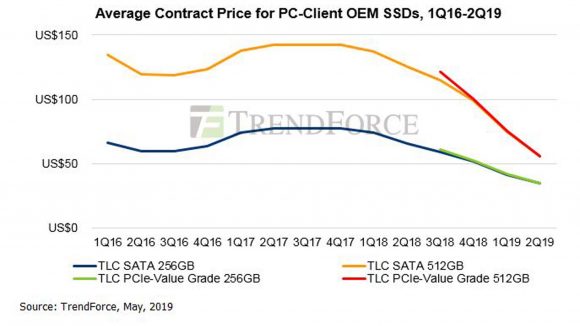 But this dramatic pricing correction won’t last forever, and DRAMeXchange expects the pricing slope to lessen as the year goes on. Manufacturers have wisened up to the market’s woes and have already slowed plans to expand fab facilities or build up a greater inventory.

Samsung has recently suffered losses due to the slowing memory demand, which still accounts for a large portion of the tech giant’s revenue. As a result, the company is reportedly shifting toward other forms of semiconductor manufacturing, notably logic chips, investing $116bn in the chip game and potentially rustling Intel’s jimmies as a result.