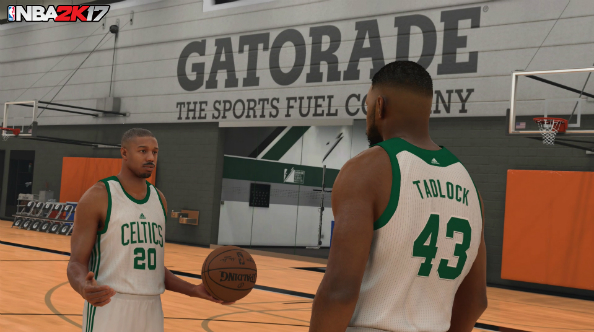 Before getting my hands on a particularly formative demo disc which contained NBA Live 2000, NHL 2000 and Madden NFL 2000 all on one CD-ROM, my disinterest in US sports was matched only by my ignorance. After one afternoon with that disc, I was an instant convert.

Looking for the best examples of another criminally maligned genre? Head over to the PC’s best racing games.

If you’re based in the UK, maybe you have a similar story from those halcyon late ‘90s/early ‘00s in PC gaming. At that time, videogames about ice hockey were a much more persuasive gateway into the sport than the Channel 5 weekly highlights show, which aired somewhere between 3-5AM on a school night. It was the same for basketball and football, too: suddenly, here was a fully-licensed and playable incarnation of a glamorous sport you’d been kept at arm’s length from by time zones and TV licensing deals. An incredible moment for any late nineties teenager, right up there with hearing your first Linkin Park song.

On both sides of the pond circa 2000, PC basketball, hockey and NFL titles were accompanied by fairly routine releases of extreme sports games from the Tony Hawk’s Pro Skater mould, perhaps an unlicensed snowboarding game around Christmas, an annual FIFA release whose regularity was a joke even in 1999, and a few soccer tag-alongs who hadn’t conceded to EA’s market dominance yet. 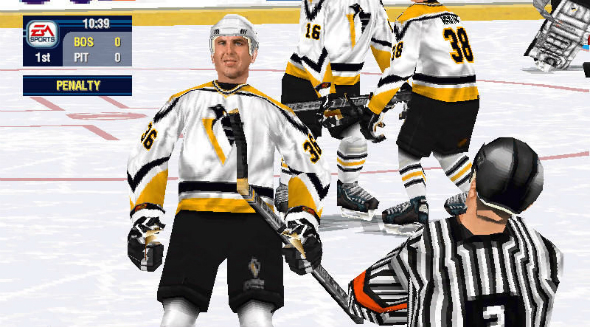 It wasn’t a great time to be a sports game fan on PC. At least, the Byzantine control schemes and shoddy port practices made it feel that way (FIFA, running at 15 fps, with a keyboard > Dark Souls). As PC gamers we were also dimly aware of all the games that we weren’t getting; the wrestling, boxing, and tennis titles that kept garnering high scores in console mags. Even then, there was a sense that publishers didn’t believe there was much of an appetite for the genre in the land of beige boxes and slightly darker beige mice. But in the fullness of time, the early ‘00s revealed themselves to be a high tide mark for sports fans with PCs.

Because in the intervening years, we’ve seen entire franchises discontinued. It’s been seven years and counting since the last EA Sports ice hockey release, for example. We’ve seen the practice of porting PC versions of FIFA and PES using last-gen console engines become commonplace. EA pulled the plug on nearly all their sports franchises on PC, and it took years for indie and ‘double-A’ developers to fill the gaps with anything of even comparable quality. As for skateboarding games, they’ve been a half-pipe dream since Tony Hawk’s American Wasteland in 2005. 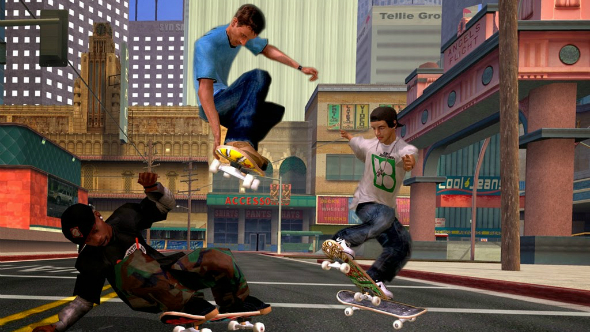 It’s 2016 now – very nearly 2017, actually – and PC sports fans are in a curious position. Looking at the landscape broadly, there’s very little to cheer us up. But neither can we be allowed to despair completely, because we’ve got the best sports game ever made: NBA 2K17.

I’m wary of throwing out hyperbole for its own sake, but that statement’s self-evident. For starters, it has a natural advantage in its subject matter. Basketball lends itself best to videogames because it’s a ‘strong link’ sport. By comparison, soccer is a ‘weak link’ sport because the impact of the weakest player on a team outweighs that of its strongest player. You might have the three best forwards in the world in your starting XI, but if one of your central defenders is a bit iffy you’ll nullify the talents of those forwards, and you’ll lose games.

How does that translate to videogames? It means that when you control all 11 players you’re in a constant fight to avoid making the mistake that’ll lead to conceding a goal. And that’s frustrating. On the other hand, if you’re controlling one player, there’s a tension between wanting to have a big impact on the game and maintaining a sense of realism; you want to have the ball constantly, but you know that’s not how the game’s played. If game designers had a blank slate to develop sports games on, there’s no way they’d arrive at soccer. 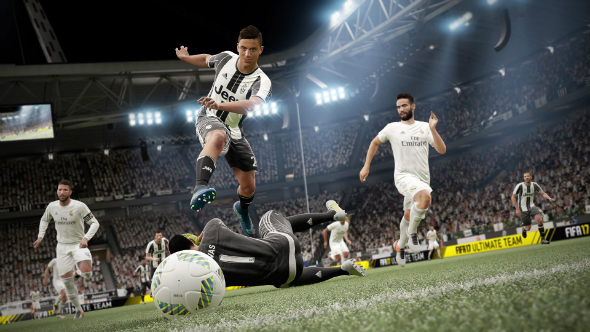 Basketball is a game about individual brilliance: get the ball to Lebron James and he’ll win games for you. Elite players like Lebron do need good team-mates in order to dominate, but it’s easier for them to drag four decent players to the playoff finals than it would be for Zlatan Ibrahimovic to drag his ten Swedish on-pitch compatriots to the World Cup finals.

Again, what does that mean in videogames? It means that controlling a team of five, you can focus on doing cool things with your best players and take the moments of individual error in your stride. And as a single player on the court, you can absolutely hog the ball, dominate the scoring and still maintain a sense of realism. Anthony Davis has already recorded a 50-point game this NBA season, scoring just under 50% of his New Orleans Pelicans’ total points that night. Sometimes you watch the sport and wonder if the elite players have the cheats turned on.

And you’ll want to control a single player in NBA 2K. It’s a series that has built its name on frankly absurd levels of polish and presentation, depth of gameplay, but above all, it’s MyCareer mode. Here you take a user-created player (or nightmarish facsimile of your own face birthed via 2K’s face-scanning app) and guide them from college basketball to NBA stardom and the Hall of Fame. It’s the best RPG you never played. 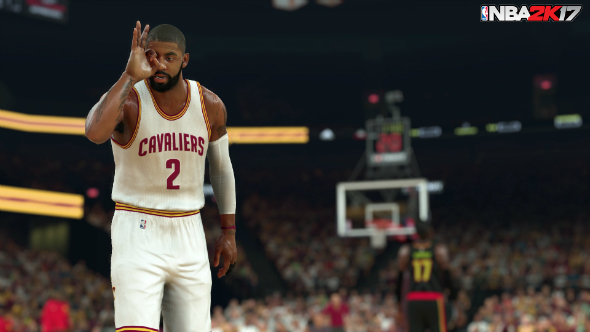 MyCareer mode plays to the strengths of the sport and the medium of gaming simultaneously. Games are power fantasies, and basketball is a glamorous, televisual and spectacular sport, full of moments of individual brilliance. After inhabiting so many mysterious strangers in fantasy lands who grow to become all-powerful god-kings, the next logical step is to look towards a real-world rags-to-riches equivalent, and a considerable allure of sport is its potential to do just that to its players.

But it works as an RPG mechanically too, better than most RPGs. Character creation presents a number of hugely significant quandaries that place meaningful constraints on your entire career. We’re talking about a game in which it really pays off to set the right wingspan. As for your height, it’s beyond crucial – it absolutely must be paired with an appropriate skillset, or your 6”0 rebound specialist will spend his career warming benches. And when you think about it, how many ‘true’ RPGs let you specialise like that, even mess up like that, at the creation stage?

That’s before you get into your actual character stats. For the first time in the series, 2K17 imposes a hard cap on your attributes based on your physique and player type. It’s intended to avoid the 99 overall ‘cheesing’ that prior iterations inevitably culminated in, and does so. If you were used to being Michael Jordan’s bigger brother in 2K16 you’ll have hated this at first, but in forcing you to specialise in being great at one style of play – lights out three-point shooter, lumbering rebounder, lithe slasher, lockdown defender etc – it demonstrates how deeply it actually simulates the game of basketball. It’s actually fun to spend 48 minutes primarily going after rebounds, not only because the control and animation schemes are so fine-tuned, but because you feel like the impact you’re having on the game is important and believable.

You could take everything about NBA 2K17 and apply it to ice hockey, or NFL, or snowboarding, and it just wouldn’t quite work. Hockey players don’t fetishize their gear like an NBA star does his sneakers, which means there’d be no equivalent of that landmark sneaker deal. Even the highest profile footballers don’t take out prime time ads to announce that they’re moving teams. You’d only ever want to play QB in NFL, and that’s kind of how Madden works already. If there’s a Michael Jordan of lacrosse, I haven’t heard of him and, hand on heart, neither have you. If you have the kind of ambitions to create a living ecosystem of athletes, personal relationships and media coverage to game-ify, basketball is the sport. And if you stubbornly harbour the idea that it’s not a PC gaming endeavour, check back on the patch notes and see how regularly the game’s rebalanced – there’s a hell of a meta. It’s PC AF.

But is the NBA 2K series enough to sustain an entire subset of PC gamers who’ve been on lean rations for over a decade? It’s not propping up the genre completely alone – FIFA is, eventually, a good game on PC now too – but 2K’s so far ahead of the pack that you wonder how anyone else could even try to compete. 2K17 still garners player counts among the top 20 on Steam, but you suspect its success on PC will alienate potential competitors, rather than entice them. We’ll be on lean rations for the foreseeable.

And that’s how the future looks for us, slumped on our desks wearing our team colours and singing the old anthem, remembering the good old days with rose-tinted glasses, looking towards the future with undue optimism. Like any good sports fan.