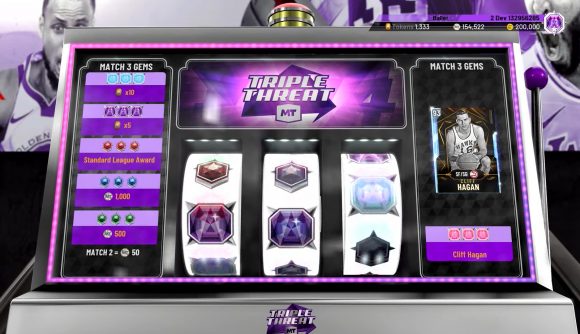 While EA’s taken the brunt of the heat in the furor over loot boxes – in fairness, the company did coin the term ‘surprise mechanics’ – but the NBA 2K series has been heavily criticised by its own players for aggressive monetisation. Take-Two has made efforts to turn those purchases a little friendlier over time, but you wouldn’t know it from the latest trailer for the MyTeam mode.

With an indistinct party song and a whole lot of gambling imagery, this looks more like a casino ad than a game trailer. Marvel as NBA players react with excitement on a good pachinko drop. Thrill as another looks away from the horrible uncertainties of a slot machine payout. You’ll be on the edge of your seat as you discover the majesty of the daily login bonuses.

Plenty of similar features have been in previous NBA 2K titles, and all these casino minigames appear to be limited to the MT currency that you can only earn in-game – not the VC that you can also purchase with real money. But given the broad criticism of loot boxes over the past few years, it’s no surprise to see Twitter and YouTube commenters alike tearing this trailer to pieces.

This trailer is a lot.

Last year, the senior producer of NBA 2K19 called microtransactions “an unfortunate reality of modern gaming.” The company went so far as asking fans to tell Belgium they want loot boxes, as the country began to move for harsher rules about gambling-style purchases in games.

NBA 2K20 – along with its MyTeam mode and host of currencies to earn or purchase – will launch on September 6. I understand there’s basketball in the game, as well.