Flashy gangs fighting for survival and treasure in the dark and dangerous underbelly of an unfathomably large sci-fi city? Sign me up! This sentiment drove many of us towards the original tabletop release of Necromunda, along with its 2017 re-release. But does the game’s first digital adaptation – Necromunda: Underhive Wars – meet our expectations?

In the grim darkness of the far future, there is (not) only Necromunda. The titular planet’s surface is dotted with Hives – humongous spire-cities, teeming with masses that will never see the sky in their lives. The great houses that rule these megapoli can’t fight directly, but in the darkness of the underhive their associated gangs can do that however much they like.

When a lightning strike reawakens some mysterious but without a doubt valuable piece of ‘archaeotech’ (amazingly advanced technology from humanity’s past that everyone’s forgotten how to use), Tessera and her gang of Escher ladies won’t be the only ones gunning for it. This is the premise of the story campaign, which you’re meant to finish before building your own gang and moving on to skirmish matches and operations (which are like short campaigns).

Now, if you know anything at all about how tabletop Necromunda is played, throw that knowledge out of the window. In adapting Necromunda for our screens, developer Rogue Factor has taken the same approach as it did with Mordheim: City of the Damned (also based on a tabletop squad tactics game, but in Warhammer’s Fantasy setting, rather than 40K). Necromunda: Underhive Wars takes the concept of gang skirmishes, whittles it down until you only have five fighters per gang, and has them powered by mechanics that are light years removed from anything you may find in its tabletop inspiration. 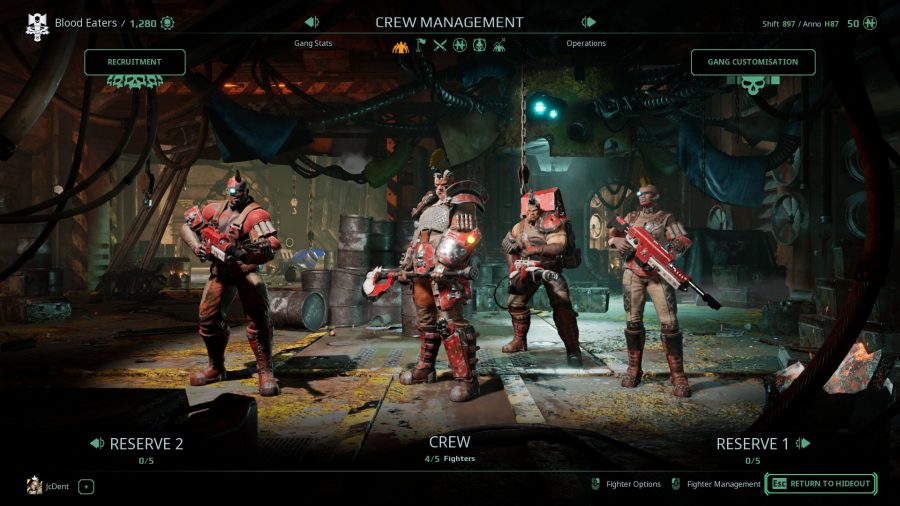 Only the essentials of alternating ganger activation remain the same. You pick a fighter to act, the enemy picks a fighter to act; Act, Die, Repeat. Gangers act once per turn, and once all of them have gone the turn advances and activations reset. But the fighter with the higher initiative score gets to act first and you can’t really know which of the gangers the opponent will choose.

So you get to activate a minion – what do you do next? Well, in Necromunda: Underhive Wars, each ganger has an Action Point (AP) pool and a Movement Point (MP) pool. The insanity of Mordheim: CoD’s movement bubbles has been replaced with a slightly less kooky system: your MP reserve is expressed as a circle around the character where they can move. Your points aren’t subtracted from the total unless you perform an action or come under attack. Therefore, you can run around quite a bit.

Quite a lot, in fact, because the game doesn’t track the real distance travelled – only the straight line from the ganger to the point of origin. Yes, even vertically. This can lead to some, let’s say interesting manoeuvres, especially from the AI. It also means that your gangers are more mobile than ever. 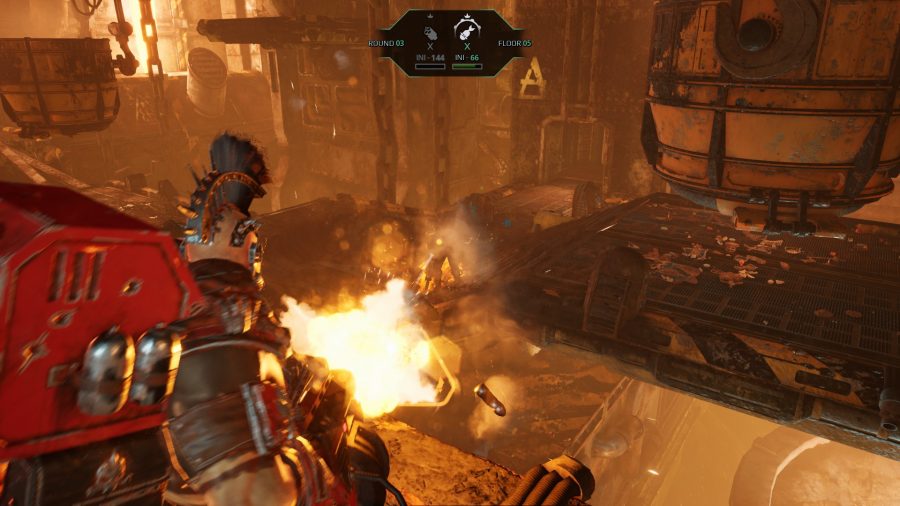 And if you don’t want to move, that’s fine – one of the abilities that everyone gets is being able to transform a large quantity of unused MP to a smaller amount of AP. And AP rules everything around you, from offensive skills (shooting, stabbing, special attacks), to tactical actions (applying buffs or medicine, even kneeling), to interacting with the environment or traversing it in more active ways (using ziplines, jumping, and vaulting).

This is very different from, and a lot more complicated than, the tabletop. Pinning is now mostly the domain of Overwatch (or Ambush for melee), which is a stance any ganger with the right equipment and AP can take. It deals damage and takes away 10 MP. You’re interacting with the environment a lot more, and you’re also much safer, since you can’t fall or fail jumps. As for the game’s various traps and hazards, they usually only apply meagre debuffs.

In exchange, combat can be quite vicious, especially when the gangers level up and gain abilities that allow multiple attacks. Once you can do that with a Heavy or a Bruiser, you can almost delete opponents in a single turn. 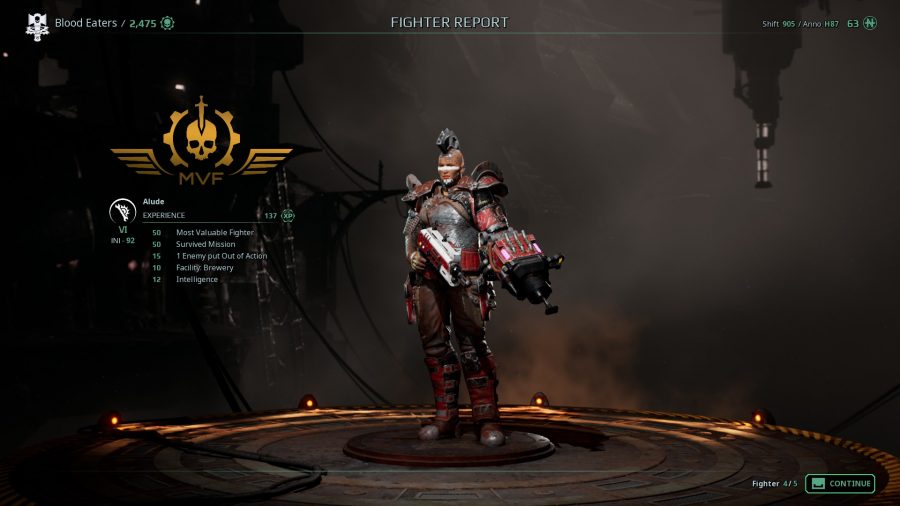 Curiously enough, all fighters have a similar base level of competence no matter their actual level. What separates a high-level ganger from a rookie in Necromunda: Underhive Wars is their ability to take punishment, increase their crit chance, and act more quickly. Those are all stats raised by skill points, but even someone with low stats can carve up someone big when armed with a good weapon. This is before you take into account abilities, of which experienced gangers will have more.

One of the most disappointing aspects of Mordheim: CoD was the granularity of stats. All the increases in skills and resistances were in single-digit percentages. This made them hard to track, and thus, hard to care about. And it’s hard to care in Necromunda as well, when a character can easily have five or more buffs and debuffs affecting it at every moment. If a character is not on Overwatch/in Ambush, you don’t really have to pay attention to it.

All the activated abilities have (repetitive) animations, complete with grunting, posing, and a circle of icons that briefly float around the character. It’s not too annoying when you’re doing it, but when you have to spectate an opponent – especially the AI – it grinds the game to a halt. Doubly so when the AI is dumb and likes to run big circles around the map and then use up all the leftover AP with whatever abilities it has (this sometimes includes throwing grenades at its own feet). 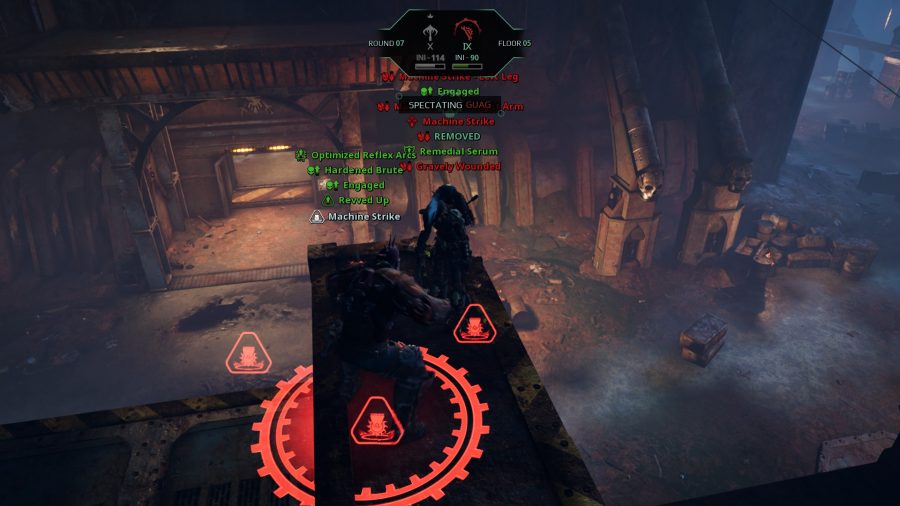 If you’re a Warhammer 40K fan, Necromunda: Underhive Wars wreaks havoc with any and all expectations you may have.

Let’s take the plasma gun, an iconic special weapon across 40K. Always powerful, it even cuts right through Marine Power Armor. In Necromunda: Underhive Wars, it’s merely an alternative to the lasgun that deals less damage per shot but can have devastating critical effects. This makes Necromunda the first game in the history of my Warhammer 40K experience in which sticking with las- rather than plas- weaponry is unquestionably the right choice. The game warps expectations with other weapon types as well, like the autocannon.

If you're a Warhammer 40K fan, Necromunda: Underhive Wars wreaks havoc with any and all expectations you may have.

About the only weapons that are as scary as you’d expect them to be are the various bolters, bolt pistols and heavies. But – surprise surprise – not everyone can use them due to Necromunda’s weird approach to classes. Instead of the usual quartet of Leaders, Champions, Gangers, and Juves, you get Deadeyes, Brawlers, Saboteurs, Lay-Mechanics, and Heavies. Any of those can be your gang leader, adding access to leadership skills. All of them have their own class specialities and access to weapons.

So only Deadeyes can use bolters and bolt pistols, while also having a grappling gun to scoot around the map more. Saboteurs can sabotage stuff in the environment, place traps (the AI loves to hoist itself by its own petard here) and throw grenades/boosts, while Lay-Mechanics build stuff and get a bionic limb that only accepts weapons made specifically for it. Heavies don’t just wield heavy weapons – they’re also the ones providing various auras. If you’re not an existing 40K or Necromunda fan, it’s hard to describe why this is all slightly off-putting, but it is. 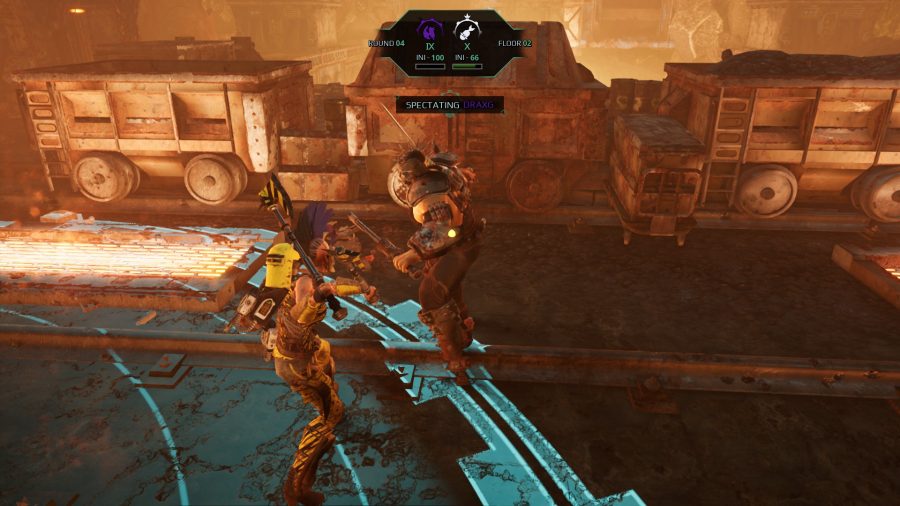 It’s also hard to put a finger on why the visual side seems to disappoint. Just like in Mordheim, the models for the characters seem to be basically correct, and the environments have markedly improved. But that’s where the improvements end. The textures and the colour palette – the little details that should wrap it all up – just don’t ‘pop’, even on high settings. I’m constantly haunted, from battles to gang management, by the feeling that I’m playing a game on medium settings – an issue that existed in Mordheim. The cutscenes are a reminder of this by contrast, as they have better colours, better animation – better everything.

There are more things we could talk about, like consumables that have descriptions busy enough to fit right into AI War II, or the extreme boredom of the equipment in the ganger market. But we risk straying into a level of grit deeper than any Hive. For me, it’s nice to see that Rogue Factory is learning from some of its mistakes in Mordheim: City of the Damned, but it’s not learning fast enough. If you wanted fast and flashy battles in the crumbling domes of the underhive, you’ll have to wait a bit more. Right now, there’s a lack of charisma and an abundance of bloat.

This adaptation of the iconic tabletop game blazes its own trail, but could have done with a bit more care and attention to make it truly great.