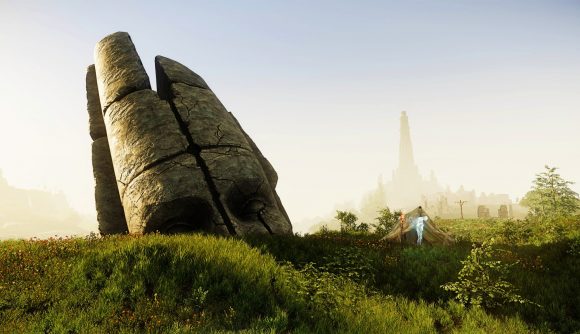 Amazon Games has laid out its plans for New World in February. Now that the developers have completed the first world merger of the year, the team is focused on “bugs, bots, and balance”. There are also teases of “more exciting content in the future”.

The MMO’s next update is currently on the Public Testing Realm – if you want to take a peep at Amazon Games is cooking up. The team is currently testing out changes to combat, PVE, Outpost Rush, and crafting. The big change to Outpost Rush focuses on scoring and rewards. Dealing damage now increases your score, and the number of points given for killing player-controlled enemies and AI foes has decreased. As for prizes, completing a match now rewards faction tokens, and Outpost Rush caches now contain two pieces of armour specific to the mode alongside a mode-exclusive weapon.

As for player combat, you’re getting the ability to swap weapons while reacting, dodging, traversing, and using consumables. Using the action won’t interrupt those moves, though keep in mind a one-second cooldown to “prevent instant weapon spamming” has been added.

Bots have been an ongoing point of discussion in the community. The developers touched upon the topic in a developer update video last month, and it seems that more news on that front is coming soon. Posts about bots on the subreddit have remained constant since the game launched last year. One submission from January proved popular as it pointed to a bot that was getting close to level 60 as it had been fishing in one spot for weeks.

As for the future, it looks like we can expect more world mergers and “exciting content”. One fan asked for more free content on Twitter, prompting someone to reply that the team is “planning more exciting content in the future”. Amazon hasn’t specified when you’ll see that new content or additional world mergers, so sit tight.