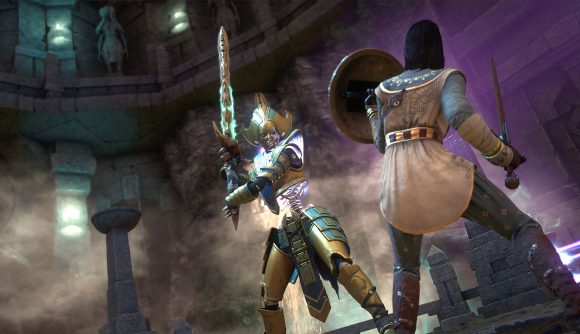 The New World devs are rolling out a patch – Update 1.0.5, if you want to be fancy – that looks to combat various issues that have been cropping up in-game of late. Alongside a hearty round of bug fixes and gameplay changes to improve combat and Outpost Rush, the patch also introduces some updates aimed at addressing coin selling and duplication-related exploits.

First up are the coin selling-focussed changes. “We know many of you have seen the pesky chat messages from players spamming messages, and we’re continuing to investigate solutions to this issue,” the MMORPG’s devs explain in the patch notes. “We discovered that many coin sellers were creating new characters and transferring money to other accounts.” To address this, the devs are rolling out several changes, which include new restrictions on player-to-player trading and currency transfers for characters less than 72 hours old and below level ten. These restrictions lift once characters hit the new thresholds.

Additionally, the devs have shifted the value of some of the MMO’s early-game quest rewards over to ones that come later in the main story questline. The total amount of coin earned will be the same, mind – it’s “just delivered in quests slightly later”. Alongside these updates, the team also says it’s rolled out bans and suspensions to “many of the reported accounts”, and adds that it’ll continue to monitor the impact these various changes have on the game’s bots and health, with more adjustments to follow if needed.

As for exploits, the devs explain that they’ve fixed two duplication-related issues with this patch. The first is one that meant players were able to use storage sheds and crafting stations to duplicate items, while the second solves the “issue of gold duplicating on territory projects we introduced by disabling trading and [the devs] made sure it would not occur in the future should we need to disable trading again”.

As for Outpost Rush changes, there are several fixes addressing issues that were letting players get out of the starting fort ahead of matches starting and causing players to get stuck in teleport loops under certain circumstances. The fixes also address some ally nameplate hiccups that meant they were incorrectly being marked as hostile, and a bug that was giving the Battle Bread buff double effectiveness.

“We now prevent multiple players from interacting with the altar in Outpost Rush,” the team also adds. “This will prevent players from getting multiple summon tokens per 500 azoth.”

For the full rundown of Update 1.0.5’s changes, including the bunch of other bug fixes and gameplay tweaks, head to the notes linked in the intro above. The patch should be going live later today, and you can check the downtimes for your region at that link.