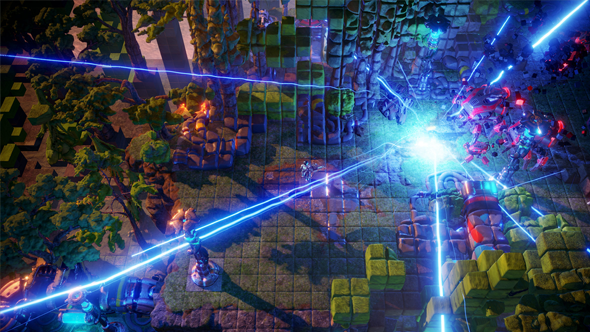 House Marque, developers of arcade-style shooters such as Nex Machina, have announced they’re giving up on the genre because there’s not enough money to be made any more.

Say goodbye to arcade games from Housemarque by playing their last one on PC, Nex Machina.

“For more than 20 years we’ve been carrying the torch for arcade, bringing arcade coin-op inspired games to the market with a Housemarque twist, and I think it’s fair to say we’ve gotten pretty good at it by now!” Housemarque’s CEO Ilari Kuittinen writes in a blog post. “However despite critical success and numerous awards, our games just haven’t sold in significant numbers.”

Recently, Housemarque bundled some of its games into free game offerings on PlayStation that brought lots of players but not extra money. Unfortunately, they couldn’t convert that interest into a new, paying audience.

“Lackluster sales of Nex Machina have led us to the thinking that it is time to bring our longstanding commitment to the arcade genre to an end,” Kuittinen continues. “While this genre will always hold a special place in our hearts, the industry is moving more toward multiplayer experiences with strong, robust communities, and it’s time for Housemarque to move forward with the industry. Hence Nex Machina and Matterfall will be the last of their kind coming out of our studio.”

Housemarque aren’t closing their doors, they’re moving onto new genres, something “totally different than what you might expect of us.” What that might be is deeply intriguing – Housemarque have made a name for themselves with frenetic shmups, gorgeous, colourful artwork, and punchy controls. I want to know what genre they’ll bring that to next… walking simulator, maybe?