Bandai Namco and Life is Strange developers Dontnod are working together on a “completely new story, new characters and everything” for a narrative game, with more details to be revealed in 2018. Hervé Hoerdt, Bandai Namco’s VP of marketing and digital, announced this in an interview with MCV.

For upcoming PC games we actually know anything about, check our dedicated article.

Beyond the inclusion of “a fair dose of investigation,” there’s precious little extra information in the interview. It’s not even confirmed for PC, or anything else, but given Bandai Namco’s other games have all made it our way recently, it’d be weird for them to skip it when Life is Strange did so well on Steam. This new narrative game has also been worked on since 2016, with a different team from both those on Vampyr and Life is Strange 2. There’s also this bit of artwork: 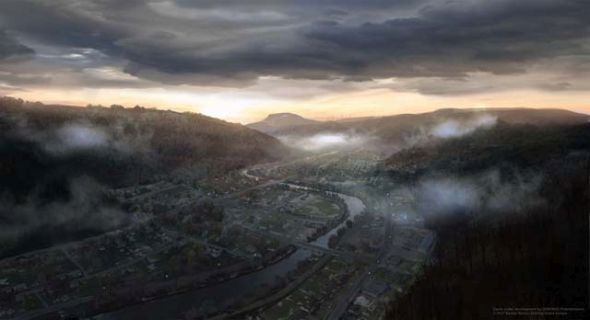 Sweet and mysterious. That, presumably, is the “fictional place in the US” where the game will be set – similar to Arcadia Bay in Life Is Strange, but more urban by the looks of it, based on the above.

Hoerdt says Bandai Namco are looking for 50% of their output to be new IPs, developed in tandem with proven studios like Dontnod. They want triple-A quality and expect “a very emotional experience,with some kind of investigation and going deep into the psychology of the characters, and giving emotion to the player” out of their partnership.

More is to be revealed in 2018, including, y’know, the name, release date, setting, plot, and so on.