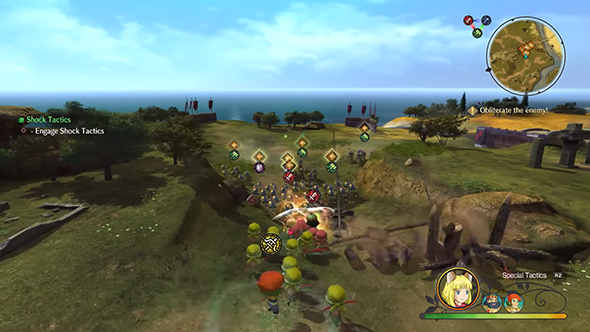 Ni no Kuni II: Revenant Kingdom is indeed a Japanese-style RPG, but there are plenty of features that expand the gameplay beyond what’s typical for the genre. You’re building a kingdom, recruiting new citizens, claiming new territory, and building up your resources to keep the nation growing. Part of that process is making war, and here that means a strategy element where you lead your armies in battle.

Have a look at the best RPGs on PC.

A new walkthrough video demonstrates the game’s RTS-inspired features, with our hero Evan leading small armies in large-scale, chibi-styled battles. Your units take the form of squads which orbit around your character in battle, taking aim at any enemies that get in range. There’s a light rock-paper-scissors system, with swords-bearers beating hammer-wielders, who in turn beat spearmen. Archery units, special abilities, and commands like airstrikes add some complications to the system.

That’s just a small part of the overall game, though, and the rest of the video demonstrates some more straightforward overworld exploration and third-person combat, which as we’ve already seen drops even the pretense of turn-based combat that the first game had. After some small battles on the overworld, we see a full boss fight with a wyvern soldier and some of his cronies.

Of course, it all still looks gorgeous, with that Studio Ghibli-inspired art looking even more lovely on a new generation of hardware. Ni no Kuni II hits PlayStation 4 and Steam on March 23. If you want to check out the original before then you’re going to need to dust off your PS3, because we’re still awaiting confirmation of a PC port of the original.