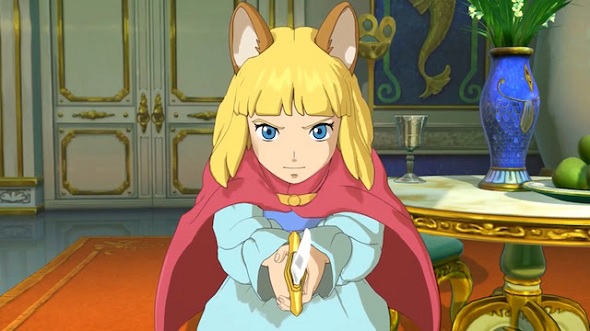 The best thing about Ni no Kuni: Wrath of the White Witch were the pocket-sized minions you could capture and battle. Called Familiars, they included creatures like Hurly, a bodybuilding meathead that was exactly the shape of an upturned pyramid, and a sentient stone tablet with legs called Neolith. I loved them.

Hungry to see the first game appear on our fair platform? Here’s what’s been said about the possibility of a Ni no Kuni PC port.

Familiars brought back all those fuzzy warm memories of playing Pokémon on my Game Boy, quietly waiting forculturally enrichingfamily holidays to pass me by. Having never seen a Ghibli movie or fallen in love with a JRPG, Familiars were the major attraction of the 2010 PS3 exclusive for me, which is why I was surprised to find that they’re totally absent in the PC-bound sequel. The good news? I didn’t miss the adorable pets for a moment during a recent hands-on session with Ni no Kuni 2: Revenant Kingdom. 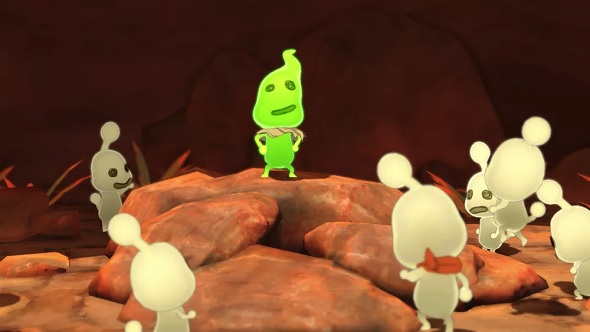 Familiars are out, Higgledies are in, and while that name makes me want to plunge head first through the monitor and choke each of the cutesy creatures to death, Ni no Kuni 2 is a better game thanks to their arrival. Higgledies are part of a wider combat overhaul: there is no more cycling through Familiars while you pick one to attack with, and the quasi-turn-based combat of the first game is nowhere to be seen. In Ni no Kuni 2’s battles, you control protagonist Evan Pettiwhisker Tildrum – there is that urge to strangle again, right on cue – shifting about a sizeable combat arena, dodging attacks, skirting foes, and swapping between melee and magic without the action grinding to a halt every time an attack cycle ends.

That real-time chaos opens up a whopping vacuum where tactical play could be, and imposes unavoidable limitations on attack options and party makeup. Higgledies do an admirable job of filling the gap left by Familiars, adding moving zones to the arena that you can dip into in order to gain new elemental buffs. There are multiple flavours – Earth, Fire, Wind, Water etc. – but you can only take four different types into battle with you, leaving you with plenty of decisions to make both in and out of combat. 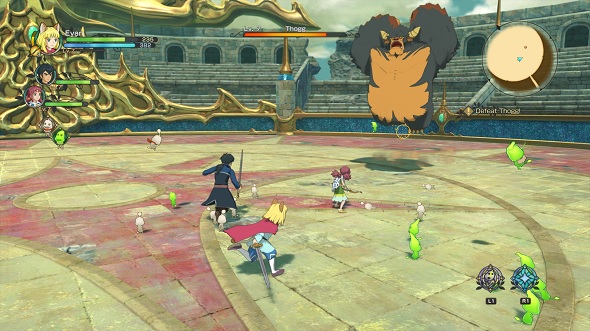 Struggling to beat an enemy that is spewing flames from its mouth and dropping pools of lava around the battle zone? Consider bringing your Fire Higgledies into the fray with you, as they can form a protective dome that shields you from fire-based attacks. There’s a trade-off for every pick, as Higgledies offer everything from damage buffs and healing powers, to powerful ranged attacks and constant fire support. Going into battle without some Higgledies that can heal is a huge risk, but having some additional firepower available can be just as life-saving.

Higgledies also feed into Ni no Kuni 2’s emphasis on positioning and staying on the move, rewarding you for being proactive and cycling through the pools of Higgledies scattered around the battle zone. Staying in one place will get you killed pretty quickly in Ni no Kuni 2, especially in tough fights against groups of enemies or bosses. Thankfully, Evan and his human allies are pretty nimble, so dodging massive attacks is more about staying on the move than it is about having razor-sharp reflexes.

The results are combat encounters that feel immediately satisfying, if somewhat lacking in long-term strategic depth. Battling in Ni No Kuni 2 didn’t grow tiresome, even when I ran into an enemy I had faced multiple times in quick succession. Higgledies add enough dynamism to keep things fresh, but the key change is the absence of turn-based mechanics, which forces you to think as you fight, constantly on your toes. With no creatures to send into battle on your behalf, there’s also a greater sense of peril: you and your foe are the key figures, Higgledies just furnish the arena.

Then there’s the newly unveiled RTS-inspired skirmishes. These are a twist on the Ni no Kuni 2’s standard combat that takes place on the world map and sees you laying waste to strongholds and armies as opposed to powerful beasts. Once again, there’s not a pause screen in sight, but here you play a leader rather than a combatant, positioning your clusters of troops so that they come into contact with an enemy type they are more likely to beat. It’s standard rock-paper-scissors stuff. Provided you can keep mental tabs on which units are strong against which other units, you’ll have no problem cutting through enemy hordes. It’s satisfying at first, particularly when special abilities like airstrikes come into play, but quickly runs out of steam – there’s a limit to how much you can dumb down RTS combat. 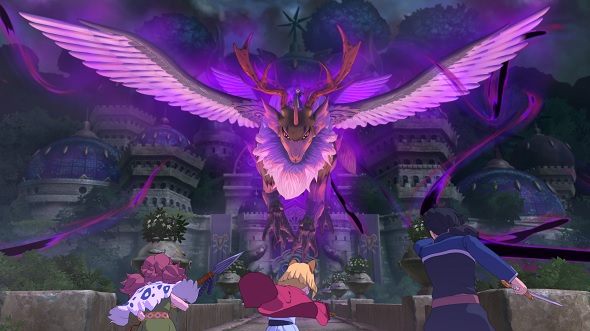 Skirmishes feel like the weakest of Ni no Kuni 2’s many combat additions, but they exemplify the change of tack developers Level-5 are adopting for the sequel. Gameplay is reactive and varied, with no mandatory breaks needed to dive into menus mid-brawl. Likewise, there are always a number of options open to you at any given moment, whether that’s activating Shock Tactics and charging at your enemy with damage and health buffs to your advantage, or sitting back and juggling your archers around natural cover until the enemy have been whittled down to nought.

Immediacy is the name of the game, and Ni no Kuni 2’s refreshingly energetic combat is the shiny result. Taking Familiars out of the game has its costs, and no doubt many who adored Wrath of the White Witch – or who never got to play it because of platform exclusivity – will see their absence as a huge loss. But the first Ni no Kuni’s combat had issues that needed fixing: too slow, too complicated, and too easy. Revenant Kingdom’s battles and skirmishes solve the bulk of these problems, making the gameplay leaner in exchange for a little less character – if that trade-off doesn’t put you off, then you’ll probably enjoy your time with Ni no Kuni 2.