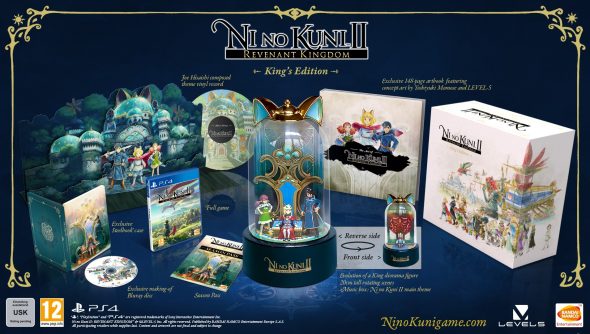 The contents of Ni no Kuni II: Revenant Kingdom special editions have been detailed and already, publishers Bandai Namco are talking about “limited quantities”.

Will Ni no Kuni 2 make the shortlist of our best RPGs?

In the UK, PC players will only be able to obtain the King’s Edition, which is shown above (the less pricey Prince’s Edition is for PlayStation 4 only). It’ll consist of a download code for the game, a steelbook case, a Making Of Blu-ray disc, a 148-page artbook, a vinyl soundtrack record, and a diorama figurine that plays Ni no Kuni II’s main theme.

Also included in the pack is a season pass which’ll give you access to “two additional pieces of content”. Pre-orders – which are live now from a selection of retailers – will also receive a “Special Sword set” comprising of five weapons.

Level 5 have announced that Ni no Kuni II: Revenant Kingdom will no longer be coming out in 2017, and pushed back the release date to January 19, 2018. We did recently see some fresh footage to tide us over, though.